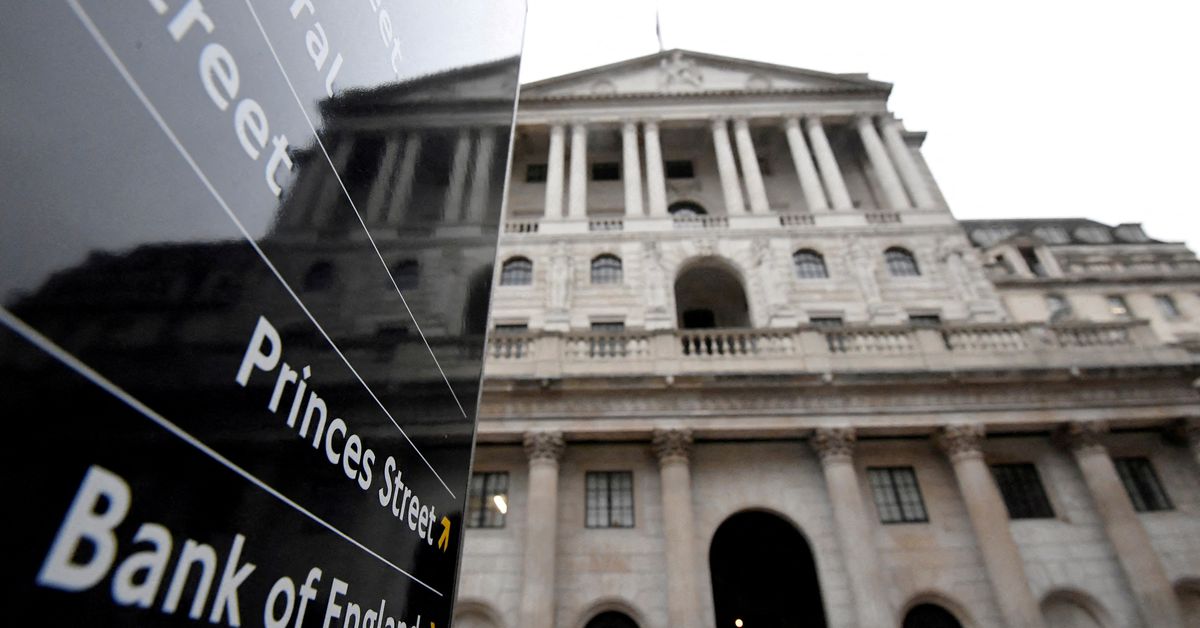 Even though the UK economy contracted unexpectedly in April and there were signs of easing inflationary forces in the labor market, the fall of the pound and the increasingly hawkish stance of other banks power plants put the BoE in a difficult situation.

All but one of 56 economists polled by Reuters last week expected the BoE to raise the bank rate on Thursday to 1.25% from 1.0%, but many warn that a hike to 1.5% could be a close call.

Financial markets indicate a probability of about 43% of a rise of 50 basis points.

Recent events no doubt show why.

The pound slipped below $1.21 on Tuesday, its lowest level since May 2020 – a headache for members of the monetary policy committee who know that a weak currency will exacerbate inflation in the coming months , with Britain dependent on energy imports.

The pound has fallen 4.5% against the dollar since late May, when Finance Minister Rishi Sunak announced additional aid for households facing a sharp drop in the cost of living – a package that economists say , could bolster confidence in Britain’s economic outlook, and with it’s currency.

The British pound’s boost did not last long, however, as US inflation accelerated more than expected, intensifying bets on Fed rate hikes.

Last week, the European Central Bank signaled rate hikes at its next two meetings, including a possible half-percentage-point hike in September.

The BoE’s trade-weighted sterling index, which measures the pound against a basket of currencies, fell on Monday to its lowest level since January last year.

Brexit-related tensions – namely the growing row over the status of Northern Ireland which threatens to upend Britain’s trade relationship with the European Union – also hurt the pound.

Worse could follow if, as financial markets increasingly expect, the Fed raises its main interest rate by 75 basis points on Wednesday, which would be its biggest increase since 1994, further strengthening the dollar at the expense of of the pound sterling. Read more

Central banks in India and Australia have already hiked rates by 50 basis points, with the latter a hawkish surprise for investors. Read more

“If the Bank starts to fall behind, that will likely increase downward pressure on the pound,” said Paul Dales, chief UK economist at Capital Economics.

“That would actually influence the Bank of England’s projections for their inflation target three to four years out, which they are aiming for,” he added.

Dales was the only economist in the Reuters poll to forecast a 50 basis point hike in the bank rate.

Previous research from the BoE has suggested that a 10% fall in the pound sterling would raise the level of the consumer price index by around 2.7 percentage points, over a period of three to four years.

REASONS NOT TO HIKE

But some economists say the BoE should resist pressure to join other central banks in a rush to raise rates, given Britain appears more recession-prone than many of its peers.

“What you wouldn’t want to see is the MPC losing its independence of thought and joining a large cohort of central banks in a rush for aggressive tightening,” said Philip Shaw, chief economist at Investec.

A 50 basis point hike – which would be the first in Britain since February 1995 – would present a presentation challenge for the BoE. Its chief economist, Huw Pill, stressed the virtues of a “stable” and gradual approach to rate hikes.

The BoE was the first of the world’s major central banks to raise rates in December last year and another hike on Thursday would be the fifth time in five policy meetings that it has raised borrowing costs, its fastest pace fast in 25 years.

There also remains a question as to whether five or more of the nine MPC members would opt for such a rate hike.

In May, only three outside members – Jonathan Haskel, Michael Saunders and Catherine Mann – voted for a 50 basis point hike.

Even if they were joined on Thursday by Deputy Governor Dave Ramsden, who has previously sat on the hawkish end of the MPC, they would still need at least one more of the other members – none of whom have publicly expressed their appetite to move in bigger strides.

Bank of America economists said Tuesday their base case was a 6-3 split in favor of a 25 basis point hike.

“We see skewed risks to a 5-4 vote and are looking for more hawkish advice,” they added.

“It’s pretty easy for me to come out and say ‘go ahead, do it,’ but they have to make a decision that really makes a difference,” said Dales of Capital Economics. “They have my sympathy.”