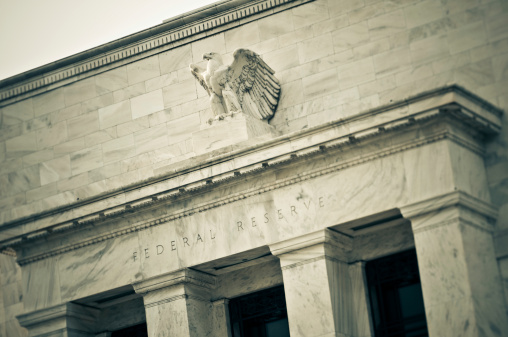 We have a very busy week ahead of us with four central bank meetings on the agenda, but the one that stands out may be the FOMC decision, scheduled for Wednesday at 18:00 GMT. After last week’s warmer than expected CPIs for August, market participants have tabled a full one percentage point rise. But is the Fed really going to put the brakes on harder this time around, and how will the outcome affect the dollar?

How did investors arrive at the 100 basis point bet?

At its last meeting in July, the FOMC made its second straight 75bp hike, but Fed Chairman Powell said it may become appropriate to slow the pace of future increases, painting a far off picture. of today’s reality. The committee did not meet in August, but investors had the opportunity to hear from the Fed chief again at the Jackson Hole economic symposium. There, Powell appeared in his hawkish suit, saying they would raise interest rates as high as necessary and keep them there “for a while.” While he acknowledged that this could hurt economic growth as well as labor market conditions, he added that these were the “unfortunate costs of reducing inflation”, and since then, many of his colleagues agreed, with Cleveland Fed President Loretta Mester adding that interest rates should rise slightly above 4%.

All of this encouraged market participants to up their bets on a more aggressive Fed, but the icing on the cake was last week’s warmer-than-expected CPI data, which disappointed those expecting an easing of inflationary pressures in the coming months and allowed others to place bets on a full percentage point rate hike at this rally. According to federal funds futures, market participants are now pricing a 20% chance on such action, with the remaining 80% indicating a 75 basis point increase. This may have increased the risk of disappointment and therefore the chance of a dollar pullback, even in the still very hawkish case of a third 75 basis point hike. 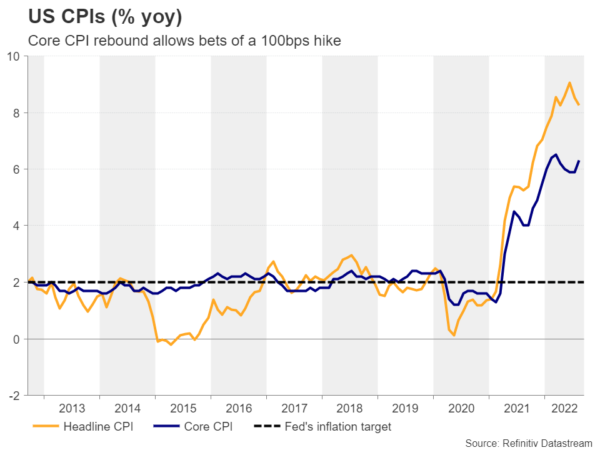 New ‘dot plot’ to determine the faith of the dollar

Still, a trend reversal in the prevailing dollar uptrend remains highly uncertain. Wednesday’s decision will be accompanied by updated economic projections and a new ‘dot plot’. Thus, the choices of investors will also largely depend on it. Currently, market participants agree that interest rates could rise above 4%, expecting a peak at around 4.4% in March, but they oppose the assessment. that they should stay there for a while. They expect a 25 basis point cut by September. For this reason, a new plot pointing to a peak near 4.4%, but no reduction for the rest of the year – in line with recent remarks by many officials – could fuel the engines of the dollar and allow it to recoup any upside. – related losses. 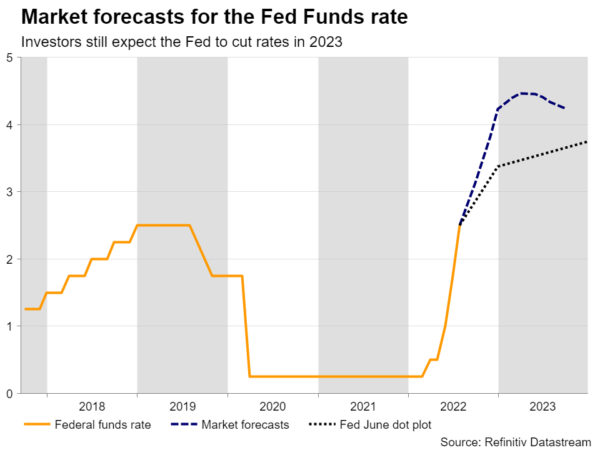 The euro/dollar could jump slightly higher in case the Fed hikes 75 basis points, but a hawkish narrative and a dot chart pointing to no rate cuts next year could allow the bears to get back into the fold. action near the bearish line from the Feb 10 high or near the 1.0200 area marked by the Sept 12-13 highs. The bearish wave could lead to a break below 0.9860 confirming a lower low and taking the pair into territory last tested in 2002. Next support could be at 0.9615 marked by the lows August 6 and September 17 of that year, the break of which could lead to extensions towards the September 17, 2001 inner high around 0.9335.

For the dollar to enter defensive mode against its European counterpart, a break above 1.0370 might be necessary. The euro/dollar would already be above the aforementioned falling line, while the move would confirm a higher on the weekly chart. This could prompt the bulls to climb towards the barriers of 1.0615 or even 1.0770, marked by the highs of June 27th and June 9th respectively.

The latter scenario appears to be the least likely, as another factor against any rate cut next year is that inflation expectations indicators, even though they recently peaked, still point to a well above the Fed’s 2% target in a year’s time. Beyond that, with the Fed adopting an average inflation target in 2020, simply hitting 2% might not be enough. Policy makers can choose to hang inflation there for a while, or even push it briefly below the target. 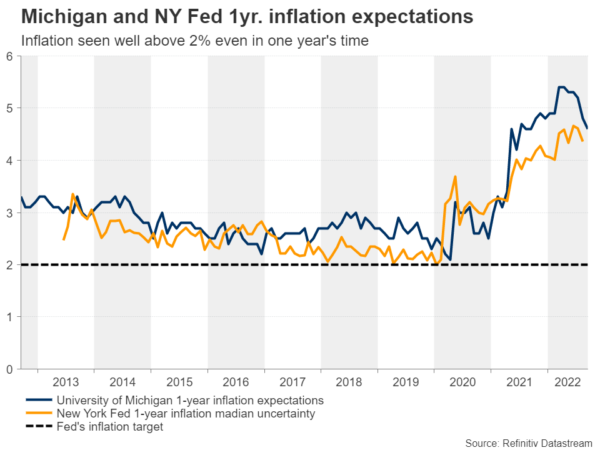