The USD / INR has produced a strong bearish sell cycle and has ruled out many support levels as speculators wonder what will happen next.

The Rupee has been extremely popular lately – don’t miss out on these great opportunities!

The last three days of trading within the USD / INR have apparently answered many suspicions about the rather high prices that the Forex pair has occupied over the past two and a half months. The USD / INR has proven that overbought perceptions are correct. The sharp, violent spike didn’t just sweep away support levels, bearish momentum crushed lower ratios. Speculators who have been fortunate enough to anticipate more sales may have seen some rather profitable trades occurring in their trading accounts.

The last few weeks of trading had suggested that the resistance levels were lasting. However, the USD / INR’s ability to not only sweep the 74.0000 level but to break through the 73.5000 mark and then move to the 73.0000 mark has been mind-blowing, even for speculators who have was fortunate enough to have a bearish sentiment and participate in the market. As of this writing, the USD / INR is crossing slightly below the 73.0000 value.

In case traders suspect that the movement has been too fast and that it will be impossible for the USD / INR to fall further, they are reminded that the pair was trading around 72.3000 towards the end of May. USD / INR was also trading near this price on 23rd of March, when it actually produced a value of 72.2700 momentarily. However, before traders aim for these lower levels, it would be wise to look at the three and six month charts to note the fairly strong upside reversals that followed after testing these low water levels.

Technically, the USD / INR certainly created a huge short-term impact with its sudden bearish peak, but for traders with a longer-term outlook – even if they are day traders – the Forex pair now sits at price proximity to a known range. . However, it is true that the current USD / INR price range is difficult to watch and does not produce some nervousness as to where the next few trading days will prevail.

It’s no fun, but the trend has certainly been bearish, and after maintaining a wild downward trajectory, some natural reversals can occur in the short term. Traders who wish to remain short are encouraged not to be too ambitious and to use take profit orders. The market at 73.0000 may prove to be a solid barometer regarding sentiment, and if the USD / INR price maintains its value below this level, there is a possibility that additional selling pressure may be observed in the near term. . Traders should be prepared for the potential for volatility to emerge taking into account the drastic moves the USD / INR has seen in recent days. 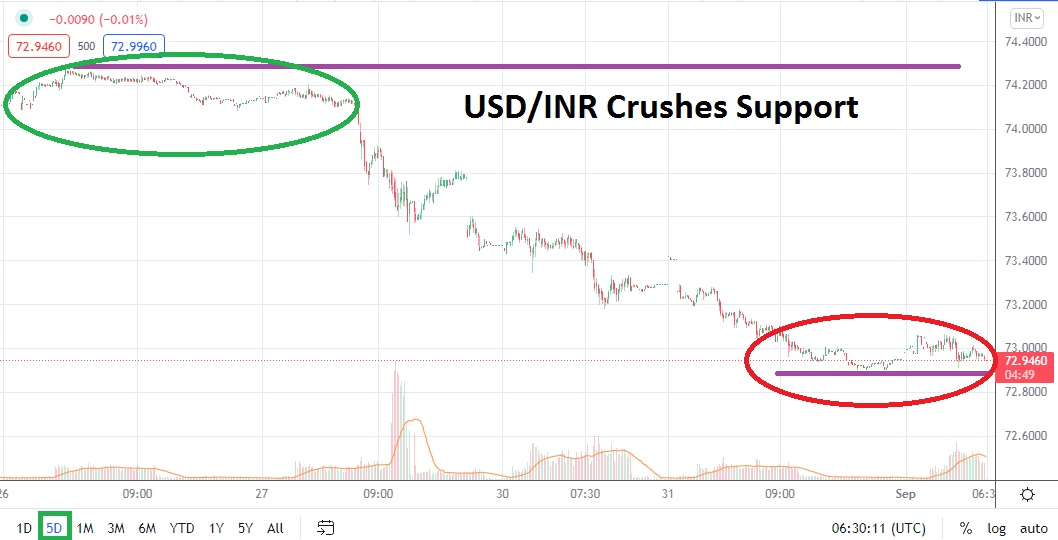 The result of the week: Delta’s fault