The market would almost certainly expect buyers to be in this area, and I think at that point you might start to see some kind of “accumulation phase”.

The $15,000 level is an area that people will pay close attention to, as it is a large, round, and psychologically significant number. That being said, there isn’t much historical support in this area, so I think this likely opens up the possibility of a drop below to reach the crucial $12,000 level, an area that had been prominent before. , and where we started the last bull run from. The market would almost certainly expect buyers to be in this area, and I think at that point you might start to see some kind of “accumulation phase”.

Volatility is likely to drive people away from the market

In this scenario, I would be a Bitcoin buyer, albeit piecemeal as I think it becomes a type of longer-term strategy. Ultimately, this is a market that I think will continue to see noisy behavior, but ultimately I think the volatility will drive a lot of people out of the market. Additionally, you should keep in mind that the Federal Reserve continues to tighten monetary policy, which hurts the value of Bitcoin and risk appetite in general. Looking at the start, it is very likely that the rallies will continue to fade, especially near the 50-day EMA. The 50-day EMA is a well-known trend indicator, so it’s likely we’ll see a lot of noise.

The $25,000 level above is a large, round and psychologically significant number, and an area that I think would define the trend if we were able to break above this level. However, if we were to break above there, that could change a lot. I don’t think that will happen until we change the general attitude of the market, but it seems more ‘anti-risk’ than anything else. 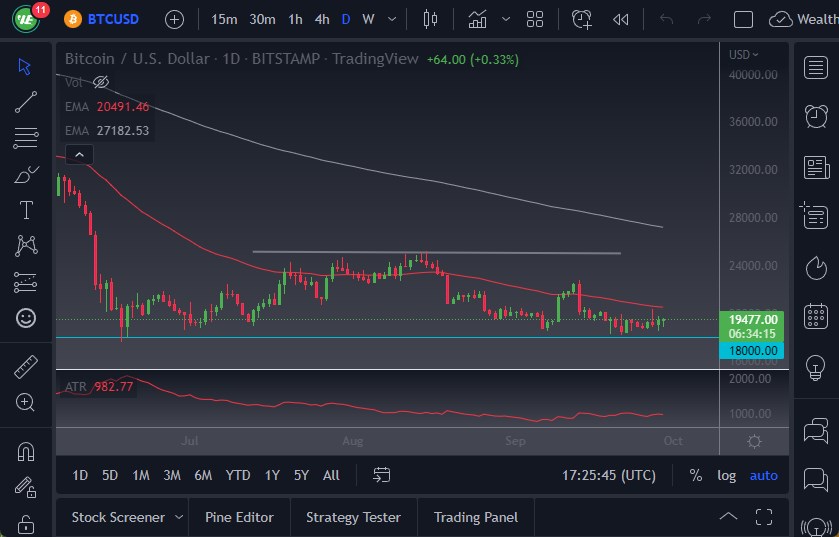 Ready to trade our BTC/USD trading forecast today? Here is a list of some of the best crypto brokers to check out.