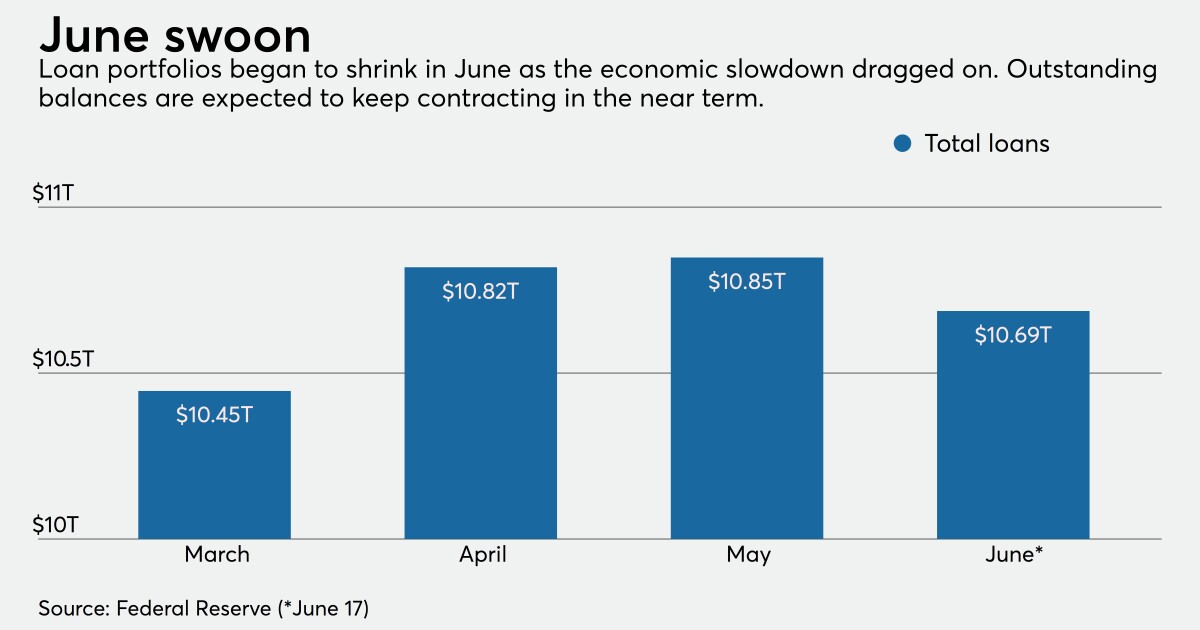 Cautious outlook for loan growth after the PPP relaunch

A word of warning about any report from banks on second quarter loan growth: take it with a grain of salt.

While some banks may hold more loans by mid-year, much of the new volume will likely be tied to the Paycheck Protection Program, which was designed as short-term assistance for small businesses affected by the coronavirus pandemic.

There is also a good chance that many banks will report lower loan balances even with the help of PPP arrangements. Total loans to banks fell 1.5% in the first half of June, according to data compiled by the Federal Reserve.

As a result, banks will be forced to focus more on niche lending, activities such as mortgage refinancing that incur fees and expense management. These topics are expected to come up frequently as banks schedule their conference calls in the second quarter.

Certainly, the Paycheck program will be a bright spot when banks release their second quarter results. Banks made more than $ 500 billion in PPP loans in the second quarter, based on data from the Small Business Administration.

But with the end of the program, these loans will start to roll off the books of the banks. They will be difficult to replace.

“We believe organic loan growth… will remain muted,” Piper Sandler’s research team said in a recent note to clients. They pointed to a “drop in demand in general” linked to a sluggish economy hampered by the pandemic.

“While there are pockets of opportunistic growth within our hedging universe, we believe large loan growth will be difficult in the coming quarters,” added the Piper Sandler team.

“There is still a lot of uncertainty in the outlook,” said Scott Brown, chief economist for Raymond James. While there was some recovery in May as states began to reopen their economies, “improvement after the initial rebound will slow, unless there is a vaccine or effective treatment for COVID-19.” Brown said.

“Significant challenges” will exist for the remainder of the year and “the risks remain mostly on the downside,” said Brown. Since heavily populated states such as California, Florida and Texas have already suspended plans to reopen, a larger economic contraction is possible, he said.

The pauses could hurt demand for loans and shrink an already tight pool of creditworthy borrowers, industry observers said.

Some banks hope to deepen ties with customers obtained through the PPP, while others are looking for areas that could recover faster than others.

Dean Athanasia, president of the consumer and small business segment of Bank of America, said the Charlotte, NC healthcare firm’s clients, such as dental offices and veterinary clinics, were quickly rebuilding themselves after have temporarily closed their doors to comply with state foreclosure orders. .

“They are ready to get back to business,” and clear customer backlogs, Athanasia said at a conference in June. these companies told the bank that they did not need another postponement.

There may be lending opportunities linked to these businesses, including lines of credit to bridge the gap between recession and recovery or, over time, loans to fund expansions as things normalize.

Nonetheless, BofA has taken a generally cautious tone about overall loan growth. Most banks have done the same.

JPMorgan Chase in New York said it always attracts new customers, but at a much slower pace.

“You’re much more likely to see us being more conservative,” said Gordon Smith, CEO of consumer and community banking at JPMorgan, at a conference in June.

Banks are actively refinancing mortgages and collecting fees, as homeowners take advantage of historically low interest rates resulting from the Fed’s efforts to lower rates and stimulate the economy.

Mortgage applications for the second week of June were 21% higher than a year earlier, according to the Mortgage Bankers Association. This is the highest volume in 11 years, with refinancing accounting for over 60% of requests.

Refinances could exceed $ 1.3 trillion this year, which would be the highest total since 2012, said Joel Kan, associate vice president of economic and industrial forecasting at the MBA.

But it could prove difficult for banks to increase overall commission income.

Piper Sandler’s team said they expect commission income to decline in the second quarter and believe non-interest income could rise just 1.5% in 2020 compared to the previous year. This forecast depends on some form of economic recovery in the second half of the year.

With that in mind, banks will likely come up with other plans to cut costs. Some have already announced plans to close branches and downsize staff and offices ahead of the release of quarterly results.

“Consumers and businesses have been banking virtually throughout the lockdown with few problems, providing another data point that banks’ physical delivery systems can be drastically downsized and further digitized,” said Michael Perito, analyst at Keefe, Bruyette & Woods.

“As investor attention begins to shift to earnings before taxes and provisions, reductions in occupancy costs could play a critical role in protecting core profitability,” Perito added.

Are Progressives Pushing Democrats Too To The Left To Win?