EUR / USD is still trying to bounce higher, but it is dominated by a cautious correction as the EUR is still suffering from weak investor sentiment. The US dollar is strengthening near the support at 1.1524, due to the Federal Reserve’s tightening policy and improving economic performance, in stark contrast to what is happening in the Eurozone.

Investors are currently busy reviewing the latest corporate newsletters as they try to get a clearer picture of the economic path ahead amid rising inflation and the lingering threat of COVID-19. One of the main concerns remains supply chain disruptions and rising material costs, resulting in lower profits for many companies. Higher costs for businesses could mean higher prices for consumers, which could threaten the spending that underpins the economic recovery. Commenting on this, says Greg Psock, CEO of AXS Investments, it looks like investors are taking the impact of high inflation on businesses at a rapid pace.

“With no major surprises on the downside, or anything very important, the bulls are overtaking the bears,” he added.

Rising inflation also placed more emphasis on the Fed’s policies and plans to start cutting bond purchases, which helped keep interest rates low. For most of the year, the Fed maintained that inflation was likely temporary and tied to the economic recovery, but became more concerned with persistently high inflation.

Eurozone inflation rose as initially expected in September, final Eurostat data revealed. Inflation reached 3.4% in September against 3.0% in August. During the same period last year, prices fell 0.3%. The price corresponded to preliminary estimates released on October 1. This was the highest rate since September 2008. Core inflation, which excludes energy, food, alcohol and tobacco, reached 1.9%, as initially estimated, from 1 , 6% the previous month.

On a monthly basis, the Harmonized Consumer Price Index increased 0.5%, in line with flash estimates. Annual inflation was largely driven by the sharp increase in energy prices of 17.6%. Among other components, the prices of food, alcohol and tobacco rose 2.0% and the prices of non-energy industrial products rose 2.1%. Prices for services rose 1.7%.

On the daily chart, EUR / USD is still at the start of an ascending channel formation, and it needs more momentum. For the general trend to turn bullish, the pair needs to break through the psychological resistance at 1.2000. Otherwise, the stronger downtrend will persist. The pair is still stable near its lowest level in four years. Moving below the support at 1.1600 gives the bears the opportunity to move strongly again, and the closest current support levels are 1.1620, 1.1545 and 1.1480.

Consumer confidence figures will be announced in the euro zone. From the United States, jobless claims will be released, along with the Philadelphia Industrial Index, existing home sales and statements from some US monetary policy makers. 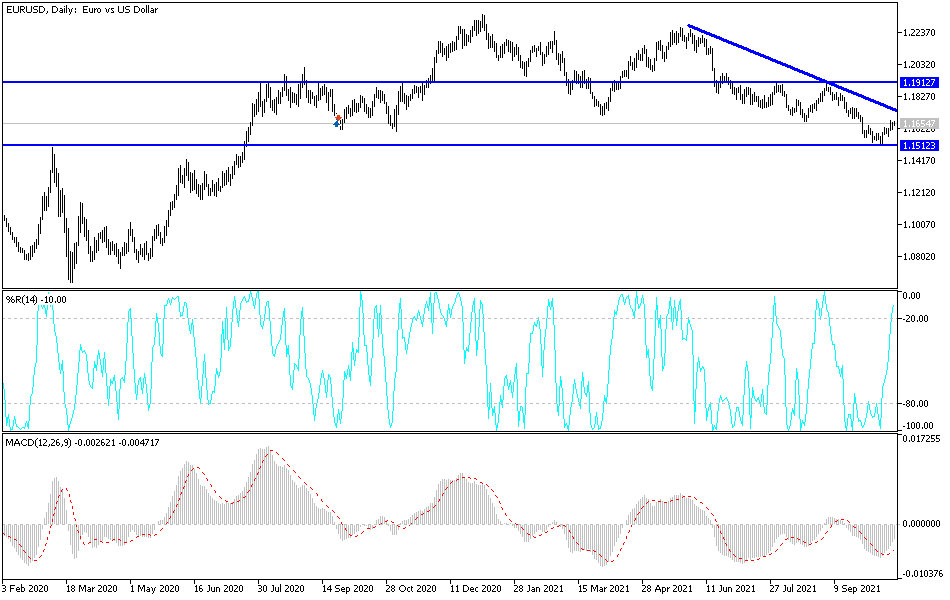