EUR/USD was on course for a fifth consecutive gain in the final trading session last week and may now have room to hit three-month highs around the 1.15 resistance. Some strategists, who also see the Euro, would find support around the 1.13 level in the near term. Last week’s Euro-Dollar gains hit the 1.1483 resistance and closed stable trading around the 1.1450 level.

Prior to these gains, the Euro-Dollar moved to its lowest levels towards the support at 1.1121. Its sudden strong gains came after the European Central Bank warned of growing uncertainty and upside risks to inflation expectations. Thursday’s comments by European Central Bank Governor Christine Lagarde appeared to have been interpreted by the market as a prelude to a potential shift in ECB policy direction, which has put pressure on investors and traders who bet against the single European currency and made the market anxiously awaiting a political decision in March.

Many analysts are of the view that the EUR/USD rate is now likely to settle in the approximate range of 1.13 to 1.15 as the market’s attention shifts to the March policy decision during which the European Central Bank is expected to announce its next three year set.

This will be crucial for market participants’ attempts to infer the ECB’s monetary policy outlook, as the ECB’s strategy specifies that its forecasts will have to assume inflation at or above the symmetric 2% target, i.e. in the middle , i.e. at the end of the forecast horizon. Before the board could consider raising the bank’s interest rates.

Such forecasts, if made in March or any time thereafter, would suggest that more immediate actions are underway, as they require a quick end to the ECB’s asset purchase program.. This is the original quantitative easing program for government bond purchases which was first announced in January 2015 and which the European Central Bank announced in December a temporary increase in the volume of its monthly purchases between March 2022 and October 2022.

As a result, the European Central Bank is expected to significantly raise its inflation forecast when it updates its forecast in March. The Commerzbank team on Friday announced a change to its interest rate expectations for the euro zone and now plans to announce two increases of 0.25% this year, which would bring the deposit rate down to zero. negative 0.50% from the ECB.

According to the technical analysis of the pair: The gains in the EUR/USD currency pair this week are enough to change the general upward trend of the pair. It broke through important levels to form the bullish channel that formed recently on the daily chart. Its recent gains are pending the announcement of US inflation figures later this week, knowing that the pair may be exposed to profit-taking trades, especially if investors return to even out the performance gap. economic conditions and the future of monetary policy tightening between the euro area and the United States.

On the downside, the 1.1360 and 1.1280 support levels are important for the bears to control and end the current bullish outlook. 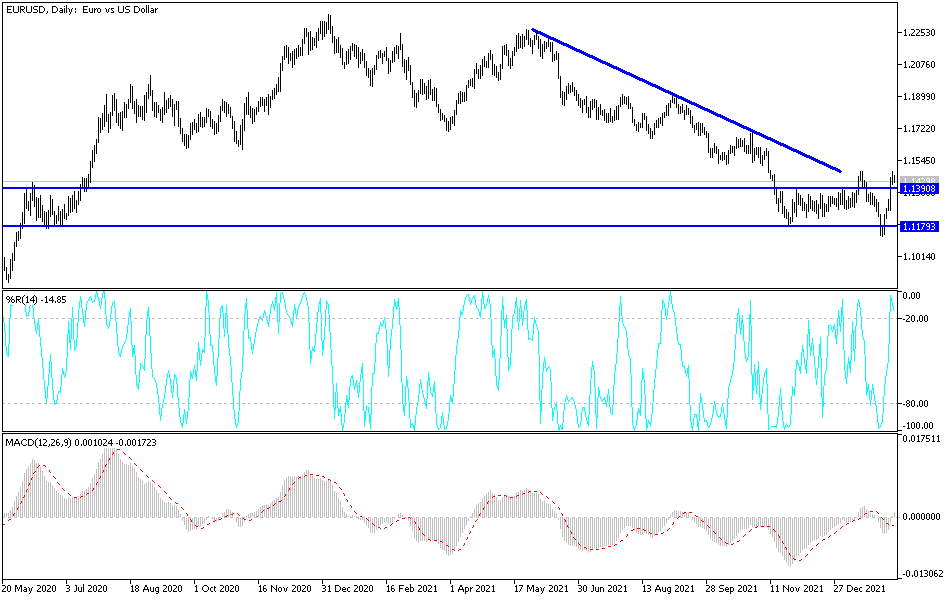 Weekly economic and financial commentary: Omicron not enough to crush the payday party

January’s US CPI may not benefit the DXY