Outlook: It’s a week of big data. We get the German CPI tomorrow and the Eurozone on Wednesday, both expected up a notch. In the US we will have jolts tomorrow (forecast 10.475 million), ADP estimate of private sector jobs and reality on Friday, likely a slowdown from 528,000 in July to 300,000 new jobs in August. ADP (Wednesday) went away for a few months to tidy up its databases (or something like that) and we admit we didn’t miss it.

As for a recessionary reading, we get the regional Fed reports from Dallas and Chicago, but the big number is likely to be the ISM manufacturing PMI for August on Thursday. It is expected down to 52.0 from 52.8 in July, but not below the boom/bust line of 50, which we got from the S&P release last week. The prices paid could be interesting.

As we’ve seen recently, Powell’s speech is going to be parsed to the core this week. We say it doesn’t need much interpretation – it was as clear as possible. We know this because the two-year Treasury yield hit its highest level since 2007. The chart is year-to-date.

Powell’s speech in Jackson Hole on Friday was notable for several things, starting with its brevity — less than ten minutes. It’s a message in its own right – do it right this time, people. “People” isn’t the term Powell had in mind, of course.

Powell stressed that reducing inflation is the first priority, even if it brings “a bit of pain” in its wake. He mentioned Volcker, in case pacifist thinkers might miss the message. In fact, they tried to see it that way in the first few minutes and it was fascinating to watch the yields, stock indices and the dollar spinning wildly on the Bloomberg TV screen. Wall Street finally got the message and the Dow fell more than 1000 points. (Note that in Europe, the ECB calls it “sacrifice”.)

Everyone knew exactly what they meant by “a bit of pain”: crushing companies that need to borrow so badly that they lay off workers and/or stop hiring new ones. In a word, unemployment. The Fed is unable to reconcile historically low unemployment with an economic slowdown that will reduce demand and therefore inflation. It’s more complicated than that, of course (can the Fed somehow raise the participation rate, for example?), but that’s the end result. The Fed will continue “until the job is done”, which means higher unemployment AND lower inflation. Remember that unemployment comes first and inflation is 6-9 months behind, maybe more. Those expecting a rate cut in 2023 are doomed to disappointment, although a few still seem there.

Powell said the magnitude of September’s rise depended on the totality of the data; July data was welcome, but the Fed needs to see more.

Powell promised to “use the tools forcefully” and take “strong and swift action,” which likely means 75 basis points at the September policy meeting, plus another 100 basis points before the end of the year. ‘year. There is no dovish gene in this animal. And in case some still want a dovish message, we have a feds parade this week to bolster Powell’s narrative. Today brings Brainard, tomorrow brings Barkin and Williams; Wednesday is Mester and Bostic, and the list is not complete. New Dallas Fed President Logan could also put his toe in the water.

Everywhere you look there is criticism of central banks – are they aligned when a president or prime minister relies on them (the autonomy issue)? Are they responsible for the mess we see now or can we blame Putin? As for blaming fiscal policy – all this handouts – there’s a grain of truth in that, but the total deficit is going down, not up, and it doesn’t matter anyway – the Fed claims the responsibility for managing inflation and has no say in budgetary matters.

One wonders if a new issue is not about to appear – a central bank which raises its rates when a recession has already appeared –? This is the problem before the ECB, which meets next week on September 8. A plausible reason for the euro to resist lower (and hard) is that there is chatter (from Austria and the Netherlands) of a 75bp hike instead of the 50bp hike. already suggested. A report says there is a 50% chance of 75bp.

Whether the ECB raises rates by 50 bps or 75 bps if inflation rises, it is always confusing to have rate hikes when the economy is so clearly on a downtrend. Last week, the S&P Composite PMI fell to 49.2 in August from 49.9, better than expected but still below 50. The Trading Economics chart says it better than words. And we still don’t know the final effect of climate damage and energy costs. In a nutshell, there is no reason to go long on the euro and stay there. We should view the euro’s spikes to relative highs as positioning aberrations. Chances are that any new high for the pound will be viewed the same way, especially now that the public is preparing to refuse to pay new energy costs, inflation will exceed 13.2% and the country is likely to to get a new prime minister without the technical know-how to design a solution. 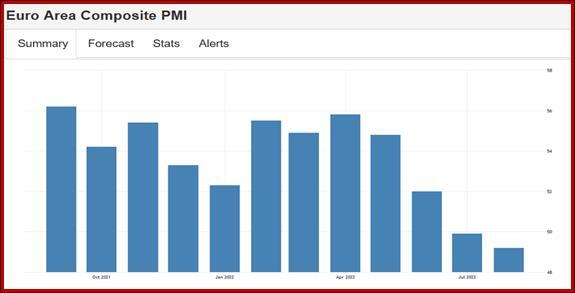 Political Information: If you or me or anyone else stole government documents, randomly stored them in an unsafe place, and lied about possessing them, we’d be in jail within days. It remains to be seen whether Trump will be indicted, and if he is indicted, whether it will make any difference to his followers. Experts say it won’t, because Trump supporters are more fascinated with sharing his grievances than with the law and the Constitution.

Somewhere in all the comments – perhaps quoting the insightful Evelyn Waugh – we found a jaw-dropping comparison. Trump copies the political ploy of British kings throughout history, albeit almost certainly unwittingly. The kings made allies of the general public against the lords of the kingdom, who so often tried to overthrow them and sometimes succeeded. Think of today’s big business and capitalist cronies as the equivalent of the duke or this county or the earl of that. Henry VIII enjoyed donning non-royal disguise and mingling with hoi-polloi; Queen Elizabeth I had copies of her portraits distributed among the people. Princess Diana was the pinnacle of royalty showing empathy and support for the masses.

It always seemed odd that Trump, who obviously doesn’t care about ordinary people (eg stiffening his contractors) positioned himself as a “populist.” He is not a populist, but certainly a master at airing grievances against the establishment. The fact that he then engineered a giant tax cut for that very establishment seems to go unnoticed amid the outcry and cries of his “unfair” treatment by another branch of that establishment, the Department of Justice. Silly point: if you give Trump enough money now, you can get “Great Maga King Status”.

This is an excerpt from “The Rockefeller Morning Briefing”, which is much larger (about 10 pages). The Briefing has been published daily for over 25 years and represents experienced analysis and insight. The report offers in-depth information and is not intended to guide FX trading. Rockefeller produces other reports (spot and forward) for trading purposes.

To get a two-week trial of full reports and trader tips for just $3.95. Click here!