Get Forex forecasts using fundamental, sentiment and technical position analysis for major pairs for the week of April 4, 2022 here.

The difference between success and failure in Forex trading will most likely depend primarily on which currency pairs you choose to trade each week and in which direction, not on the exact trading methods you might use to determine entries and breakouts. commercial outlets.

At the start of the trading week, it is good to have an overview of what is developing in the market as a whole and how these developments are affected by macroeconomic fundamentals and market sentiment.

There are some strong tendencies in the markets, so it’s an interesting time to trade.

I wrote in my previous article last week that probably the best trade of the week was long on USD/JPY. It was a good move as USD/JPY rose 0.37% during the week.

The news continues to be dominated by the Russian invasion of Ukraine which is now in its sixth week. Ukraine succeeds in repelling Russian forces from kyiv, while Russian forces concentrate on southern and eastern Ukraine. However, the war no longer seems to have much impact on the markets, but that could change quickly if reports that the two sides are closing in on the terms of a ceasefire, barring the Crimea issue, soon prove accurate. One would expect this news to boost equities and depress energy and agricultural commodities.

Despite the worrying conflict in Ukraine, Markets have continued their shift towards sentiment and a risk bias over the past week, with equity markets mostly up and currencies mixed. This can probably be explained by three factors:

Despite the relatively bullish price movements in equity markets, it should be noted that the S&P 500 index is languishing very close to its 200-day moving average, suggesting more consolidating than bullish price behavior.

In other news last week:

Last week, the global number of new confirmed cases of coronavirus fell for the second week in a row. Around 64.5% of the world’s population has now received at least one vaccine and 6.2% are known to have contracted the virus.

The week ahead in the markets should be dominated by the continued normalization of volatility and directional price movement. We saw the Japanese Yen regain some of its value after USD/JPY peaked around ¥125.

We have a few high-impact economic data releases due this week, in order of likely importance:

The weekly prize chart below shows the US dollar index rose slightly last week, in line with the long term bullish trend, printing a bullish doji candlestick, which can be a sign of indecision. However, the lower wick was supported by 12293, so if the price can break last week’s high in the week ahead it will be a bullish sign Dollar bulls will be buoyed by the nearest support level , shown in blue at 12293 in the lower price chart, continued to hold, raising hopes that the greenback will resume its advance more strongly.

It may be wise to take positions in favor of the US dollar in the Forex market over the coming week. 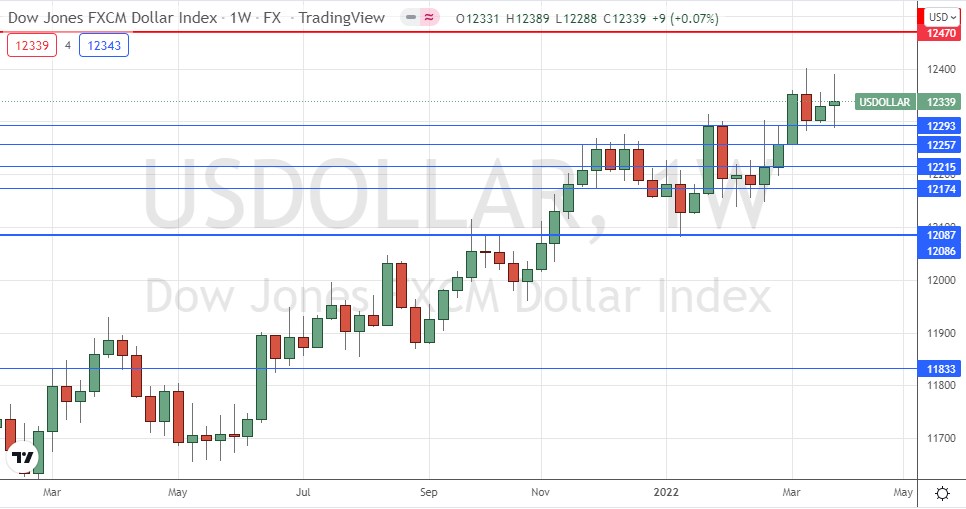 The world’s largest stock index, the S&P 500, rose again last week, despite the realization three weeks ago of the first “death cross” / “bear cross” (the 50-day moving average crosses below the 200-day moving average) seen since the coronavirus shock of March 2020.

The price closed Friday very slightly higher on the week, just a little way back above the 200-day moving average, but still below the key resistance level shown on the weekly price chart below at 4596. Note that the weekly candlestick is a pin bar rejecting a resistance level , which is usually a bearish sign. There are also dominant signs of consolidation. I see the US stock market as an uncertain trade right now due to signs of deteriorating consumer demand and a tightening of monetary policy by the Federal Reserve. Long-term trading on strong short-term momentum might be the best strategy here over the coming week. 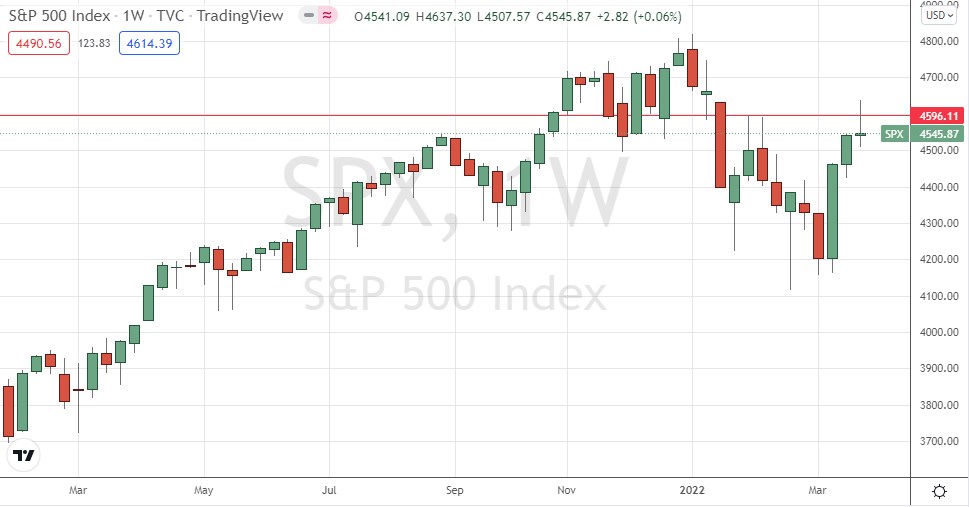 The USD/JPY has risen very strongly in recent weeks, finally peaking the penultimate week at its highest closing price seen in over 6 years above ¥125. Last week, the price broke off these highs and slowly began to consolidate on decreasing volatility.

There is a reason to keep looking on the bullish side after such a strong price move and public statements from the Bank of Japan suggesting that it might tolerate the price rising as high as ¥130 before intervening.

The best way to judge if this pair is going to make another significant move higher is to watch if we can get a daily close in New York above the key resistance level at ¥123.12. I won’t take a long trade until this hurdle is overcome. The fact that last week’s candlestick was a pin bar is another reason to be cautious. 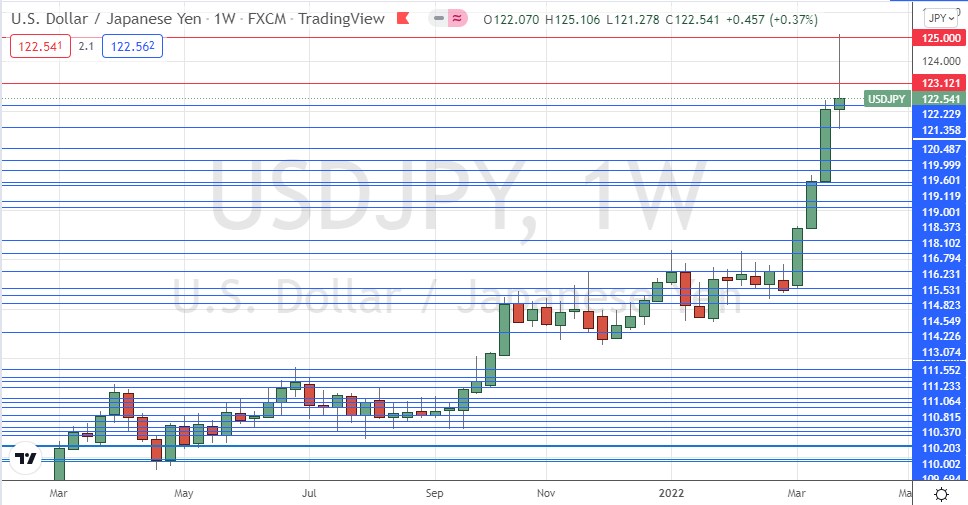 I see the best opportunities in financial markets this week as likely to be long in USD/JPY, after a daily close (New York) above ¥123.12.