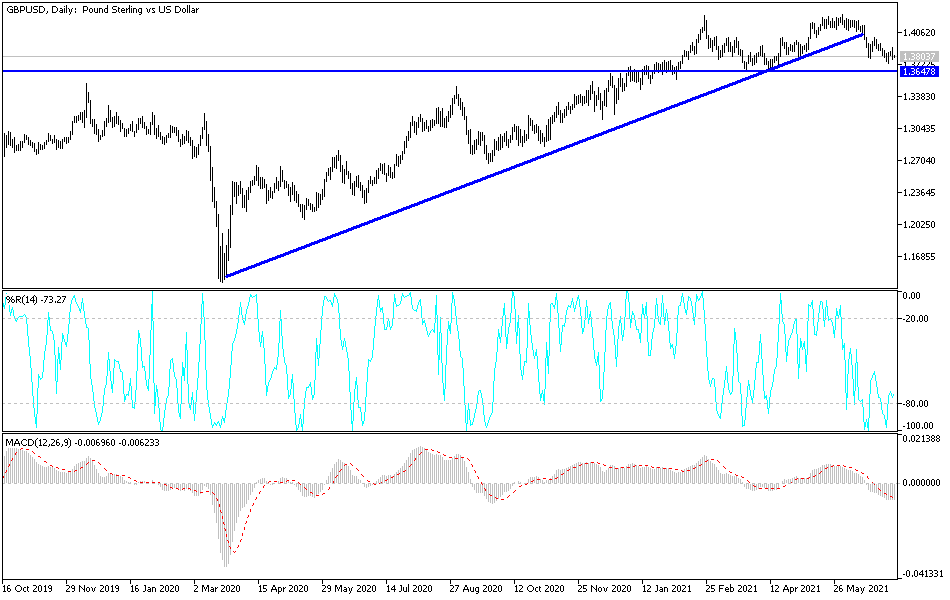 The price of the GBP / USD currency pair has not risen much beyond 1.3898 despite the UK government’s announcement that it will drop all coronavirus restrictions. With the return of the US market after the July 4th holiday, the dollar rallied and as a result the currency pair fell to the support level of 1.3773 before settling at around 1.3800.

The strength of the US dollar came as policymakers at the US Federal Reserve (Fed) presented the date they expected US interest rates to rise from 2024 to 2023 at the policy meeting of June. Meanwhile, pressure is mounting on the Fed to decide how it intends to end its quantitative easing program, a necessary prelude to any rate hike.

The change in expectations about the future of Fed policy has led to higher paid yields on US government bonds, which in turn increases demand for the dollar. The basis for the Fed’s shift in stance is the strength of the US economy, which has released inflation data well above the Fed’s 2.0% target.

With the talks starting this week, British Prime Minister Boris Johnson confirmed Britain plans to repeal laws requiring face masks and social distancing later this month, even though he acknowledged that the lifting restrictions would lead to an increase in Corona virus cases. Johnson said statutory checks will be replaced by “personal liability” when the country takes the final step on its roadmap to lifting the lockdown. This is expected to happen on July 19, although Johnson has said a final decision will be made on July 12.

Removing social distancing rules will allow nightclubs to reopen for the first time in 16 months, and people will be ordering drinks from bars again. Customers will no longer have to consult the mobile application to provide their contact details when entering the venue. The government will also stop ordering people to work from home if they can, leaving employers free to fire their employees in the office.

Britain has recorded more than 128,000 deaths from the Corona virus, which is the second highest death toll in Europe after Russia, and infections are on the rise due to the highly contagious delta variant, first discovered in India. The number of confirmed cases rose from around 2,000 the day before this year to 25,000 a day last week. The death toll is broadly stable, with less than 20 deaths per day.

As a result, public health officials say the UK vaccination program has weakened, if not cut, the link between infections and deaths. So far, 86% of UK adults have received at least one dose of the vaccine and 64% have been fully immunized. The government aims to give both doses to anyone over the age of 18 by mid-September. Johnson stressed that Britain must “learn to live with this virus” – a major change in tone from a leader who previously portrayed COVID-19 as an enemy to be defeated.

Survey data released by IHS Markit showed that the UK construction sector has experienced the strongest growth since June 1997, supported by a further strong increase in new orders. Thus, the PMI rose to 66.3 in June against 64.2 in May. A reading above 50 indicates growth. Strong increases in business activity were observed in the three main areas of the construction sector monitored by the survey.

Construction in the residential construction subcategory grew at the fastest pace since November 2003. The second best performing region was business, with output rising at the fastest pace since March 1998. At the same time, Civil engineering activity rose sharply in June, but the pace of growth slowed to its lowest level in three months. There has been a rapid change in demand for new construction linked to the opening up of the UK economy. Manufacturers reported another month of strong hiring increases, reflecting efforts to increase capacity and meet new incoming orders.

According to the technical analysis of the pair: Do not change the bearish outlook for the GBP / USD currency pair without crossing the psychological resistance at 1.4000 again. In the current situation, bear control is stronger, and it might be ready to test stronger support levels, the closest to them currently being 1.3775 and 1.3690, respectively. Persistent fears of a rapid spread of Corona variables and confirmation of the impending date for US monetary policy tightening will remain pressure factors on any gain for the currency pair in the coming period. Today, the focus will be on announcing the contents of the minutes of the last meeting of the US Federal Reserve.