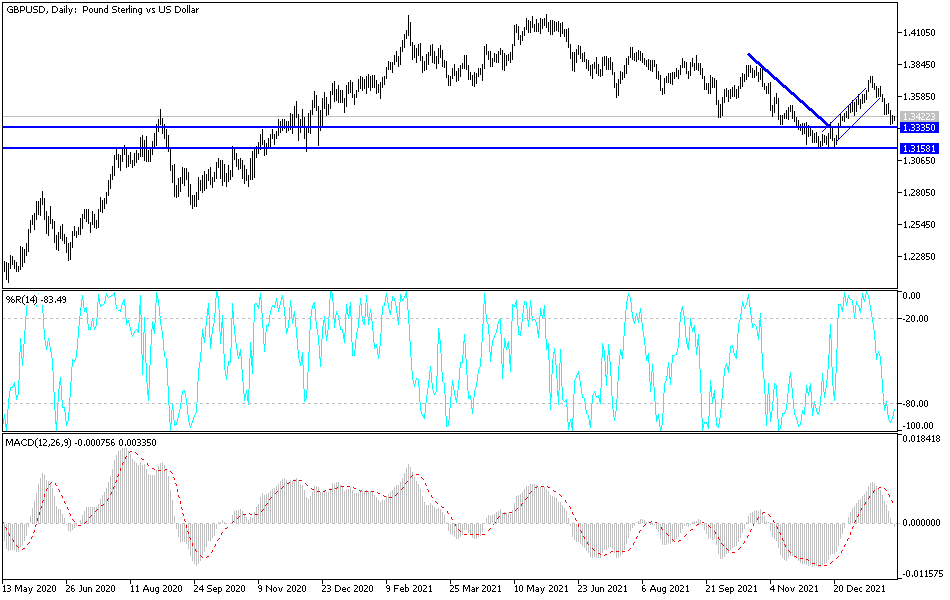 The price of the GBP/USD currency pair is stable at the time of writing the analysis, as it stands around the 1.3425 level. This is a rebound from heavy selling that the currency pair was exposed to, which pushed it last week to the support level of 1.3358, the lowest in over a month. . The US dollar has recently found itself in a strong position as the FOMC statement confirmed that the US central bank is about to raise interest rates. Additionally, the forward-looking US GDP for the fourth quarter of 2021 indicated stronger-than-expected 6.9% growth compared to the projected 5.3% expansion.

The PCE core price gauge inflation has raised expectations of a US interest rate hike in March as heightened price pressures will soon push the Fed to tighten. That could mean a lot of upside for the US dollar, even against the pound whose central bank is also under pressure for tightening. This week, the foreign exchange market will have an important day with the announcement of the monetary policy decisions of the Bank of England. The bank is strongly expected to raise the interest rate from 0.25% to 0.50%, which could provide strong support for the pound.

UK inflation hit a multi-decade high of 5.4% in December, and with (future) energy prices soaring in the meantime, BoE policymakers are likely to revise their expectations upwards this week in anticipation of another long stretch. Prices continue to grow at rates well above the 2% target. Some other economists have argued that recent and ongoing increases in the cost of living could make the BoE reluctant to reverse rate cuts announced to support the economy at the start of the coronavirus crisis, which lowered the rate of bank from 0.75% to 0.10%.

The US dollar may be more tempting than the British pound, although rising US inflation is supported by stronger growth while the UK faces stagflation issues.

According to the pair’s technical analysis: GBP/USD is heading lower on the hourly chart as it formed lower highs and lower lows in a descending channel. The price is bouncing off the support level and may be due to a move back up. Applying the Fibonacci retracement tool shows that this is in line with the 61.8% Fibonacci retracement around 1.3467. A slight pullback could already find sellers at the 38.2% Fibonacci level around the middle area of ​​the important channel at 1.3425 or at the 50% level near a minor psychological mark of 1.3450.

The 100 SMA remains below the 200 SMA to confirm that the downtrend is more likely to resume than reverse. The 100 SMA is also near the top of the channel, which adds to its strength as resistance. If any of the Fibonacci indicators hold, GBP/USD could start to slide back to the 1.3357 low or the channel low. The Stochastic is still pointing up to show that there is some upside pressure, but the oscillator is also approaching overbought territory to reflect exhaustion. A refusal would confirm the return of the sellers. The RSI has more headroom before it hits the overbought zone, so buyers can stay in control for a bit longer.

Weekly economic and financial commentary: The hawks in full control at the Fed