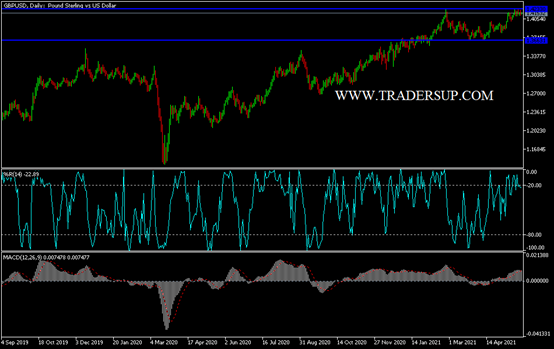 GBP / USD will remain in a narrow range until the results of US inflation data are released.

In the recent period where whenever the GBP / USD currency pair tries to stabilize above the resistance at 1.4200, it is subject to sells with profit taking. Its gains since trading started this week hit the resistance level 1.4233, the lowest level being support at 1.4111, and stabilized around 1.4165 at the time of writing. . So far, the pound is at risk of abandoning the gains it made against the euro and the dollar during the month of May if the current crisis of weakness continues until the end of the month. The pound has already fallen three-quarters of the percentage against the euro this week, while Tuesday’s session saw small gains this week against the dollar.

This is disappointing for those looking to face the pound, as there is no clear news or data to prove the recent declines, so identify potential triggers that could reverse the trend in the pound’s performance. is a difficult task. The most useful explanation for this recent lukewarm performance is that news and data has moved away from the UK this week and attention is turning to other currencies as there are conditions for higher prices. , especially the euro. Commenting on this, Dara Maher, head of research at HSBC, said: “The failure of the British pound to keep pace with the euro matches our view that much of the good news about the UK economy is already being translated into sterling ”.

For their part, Forex analysts at Deutsche Bank said last week: “After betting on the rise of the pound sterling at the start of the year, we are now heading lower.” As a result, Deutsche Bank – one of the world’s largest foreign exchange traders – said in a new strategy note that “if the stars are lining up so far this year for the pound sterling, there are plenty of good news in the price. ”Currently, the exchange rate of the pound against the dollar (GBP / USD) looks more positive, and as of Tuesday it returned above 1.42.

However, much of this movement was the result of the continued weakness of the US dollar, confirming the idea that the British pound lacks distinct upward drivers.

Additionally, JP Morgan analysts say the market has been “in good shape” in response to the GBP’s good news about vaccinations and the reopening of the economy for some time now. “This would make the pound vulnerable to the reopening of other major economies and the resulting rebalancing of interest rate spreads,” said Mira Chandan, Forex analyst at JP Morgan. This view is particularly apt against the euro, which appears to be the current darling of the currency market, as investors grabbed Eurozone assets in anticipation of the region’s recovery.

UK economic data has generally beaten expectations (the UK Economic Surprise Index is currently +47 vs. 23 in the Eurozone and zero in the US), but that didn’t necessarily translate into clear additional upward pressure on ranked expectations in recent weeks in the UK. . It is these higher interest rate expectations that matter. When UK interest rates rise, the pound tends to be boosted.

For UK interest rate expectations to rise, the market must become increasingly convinced that the Bank of England (BoE) is looking to advance the timing of the first rate hike in the next cycle.

According to the technical analysis of the pair: So far, despite the weakness of the upside stimulus, the general trend of the GBP / USD currency pair is still up, and there will be no first trend reversal without going to the 1.3980 support level. The sell with profit taking for the currency pair is best placed around the resistance levels of 1.4245 and 1.4320, respectively. The currency pair will remain in a narrow range until the results of the US inflation data are released.