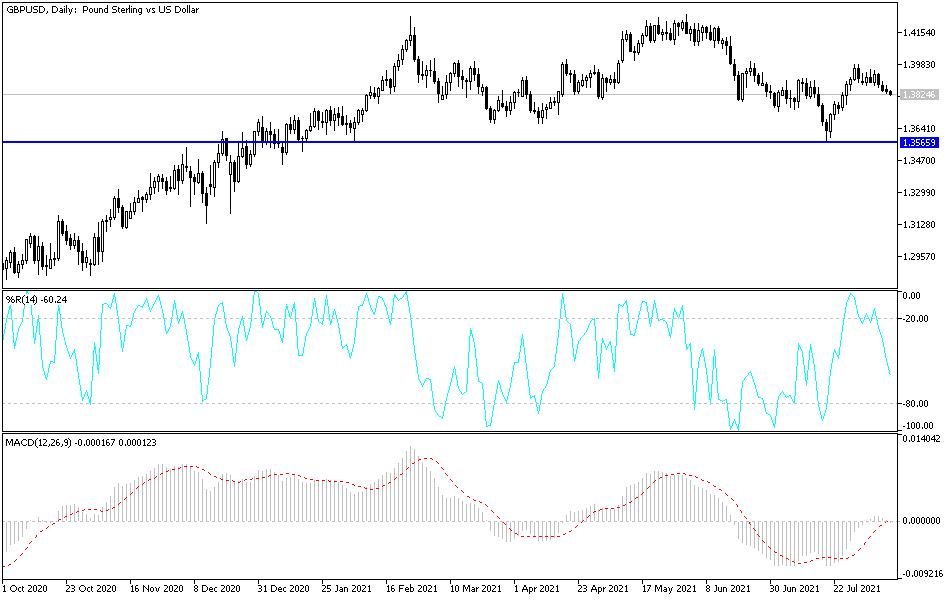 GBP / USD is moving within a very narrow range in light of the pound’s stubbornness against the strength of the US dollar. The dollar strengthened after impressive US employment figures, which showed the extent of the rapid economic recovery from the effects of the epidemic, paving the way for Federal Reserve policy tightening. The US Federal Reserve was also matched with optimism that the Bank of England could tighten policy, causing EUR / USD to fall and stabilize around 1.3825. at the time of writing this article.

The policy of the world’s central banks determines the market price of currencies. In this regard, Intesa Sanpaolo points out that central bank policy is the main driver of currency valuation in the current market environment, as these central banks are likely to raise their interest rates ahead of their peers and are therefore likely to see their currencies appreciate. As for the European Central Bank (ECB), the Bank of England (BoE) and the Federal Reserve are both leading on this metric. The Federal Reserve seems increasingly ready to announce that it will start reducing its asset purchase program (tapering) by the end of the year, a development that the markets see as increasingly likely following a series of speeches by members of the Fed this week.

The reduction in the US central bank’s asset purchase program is a prerequisite for the rise in interest rates, and the markets now anticipate a rise in prices at the end of 2022 / beginning of 2023, considering that this will be favorable to the dollar.

In contrast, the Bank of England reworded its guidance on the interest rate outlook in its August policy update, stating: “If the economy grows broadly in line with the central expectations of its report on August monetary policy, a slight tightening of monetary policy will be the period to be consistent with the sustainable achievement of the medium-term inflation target.

The market currently expects the BoE’s rate to rise around mid-2022, but the Bank’s own expectations for inflation and economic growth must be met to keep the calendar alive. As a result, the pound could be more responsive to data than it has been for some time, especially now that the political risk premium of Brexit that has weighed on the currency since 2016 has largely evaporated. In addition, Britain’s GDP figure for the second quarter and June is due this Thursday and is one of the most significant events this week for the pound sterling.

Beyond the GDP numbers, keep an eye out for the all-important inflation numbers for August 18. The British Bank’s August monetary policy report saw economists revise their inflation forecasts to 4% in 2021, 2.5% in 2022 and 2% in 2023 from 2.5%, 2% and 2% respectively in its May report on monetary policy.

The GBP / USD currency pair may break out of the current resistance if the bears move the pair towards the support levels at 1.3755 and 1.3680. I always prefer to buy the currency pair from each bearish level. The bulls will regain control of the general trend by moving back towards the psychological resistance level at 1.4000 which can occur immediately after a move towards the resistance at 1.3920.

Today’s US inflation numbers and the UK economy’s growth rate tomorrow will be the main drivers for the currency pair this week.

Australia rallies after CPI as expected