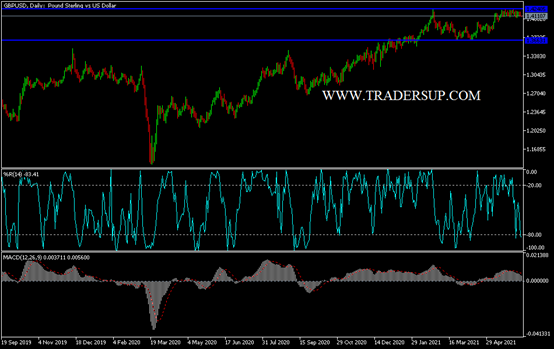 It has often been noted that sterling’s gains could be subject to evaporation if current fears about the future of ending plans to reopen the UK economy persist. This is in the midst of the emergence of variable strains of the COVID-19 outbreak, negatively affecting the UK vaccination route, compared to other global economies. The price of the GBP / USD currency pair is stable around the 1.4110 support level at the time of writing. From the resistance level of 1.4250, the highest in more than three years, recorded in last week’s session. The pound sterling gained momentum yesterday after comments from Bank of England chief economist Andy Haldane that the bank could ask to stop benefiting from massive monetary stimulus following strong monetary stimulus pressures on the bank.

Speaking to LBC Radio, Haldane said that “the UK economy is on the way to wiping out the effects of the pandemic” and should not rely too heavily on “money medicine”. “If wages and costs go up, inflation is not too far away,” he added. This could mean that at some point we need to start turning off the tap when it comes to the monetary policy support we provided during the coronavirus crisis. “

Haldane also warned that there is a risk that inflation will exceed the target for a little longer than expected.

The deterioration of relations between the European Union and the United Kingdom will be the center of attention in the coming days amid rumors of a possible trade war between the two sides due to the failure to reach an agreement on the implementation of the Northern Ireland Protocol. After years of obsession with BREXIT and its impact on the British Pound, 2021 has been relatively free of headlines related to the UK’s divorce from the European Union.

However, that looks set to change, and the future of Brexit clauses is affecting the direction of the British Pound amid threats from the European Union that it will impose duties on UK exports if it does not fully implement the provisions of the Northern Ireland Protocol. month.

The Telegraph reported that British Prime Minister Boris Johnson is considering “all options” amid “looming trade war, after Brussels threatened to impose sanctions on British exports to Northern Ireland” . The problem is likely to increase interest in the forex markets, and past experience has shown that the pound tends to depreciate as Brexit concerns grow.

Technical analysis of the pair: The current bearish control of the performance of the GBP / USD currency pair will increase in the event that it moves towards the support levels 1.4070, 1.3985 and 1.3880, respectively. This will be very likely if UK plans to exit Corona restrictions are completely disrupted and infections increase with Corona variables. The dispute between the European Union and Great Britain has intensified.

On the upside, the bulls will come back to control the performance of the sterling as the resistance at 1.4220 is again breached. So far, I still prefer to sell the currency pair from all bullish levels. The currency pair is not waiting for any major UK economic data, and the focus will be on the announcement of the US Consumer Price Index and the number of weekly jobless claims.