The Dow Jones Industrial Average returned in its recent trading to intraday levels, to post gains in its latest sessions of 1.63%, to add about 535.10 points to it. It settled at the end of the session at the level of 33,309.52, after its decline during Tuesday’s session of -0.18%.

The Dow Jones closed its best day in three weeks after July’s core consumer price index showed a slowdown in inflation, largely due to lower energy prices, which which could ease the monetary policy burden of the Federal Reserve.

The consumer price index was unchanged in July from a 1.3% gain the previous month, according to the Labor Department. Inflation in the 12 months to July slowed to 8.5% from a 41-year high of 9.1% in June.

A closely watched measure of core inflation that excludes more volatile food and energy prices rose 0.3% in July, a slower pace than the previous month’s 0.7% increase . While the 12-month rate remained stable at 5.9%.

The Federal Reserve will review the data ahead of its September 20-21 monetary policy meeting, when it is expected to raise the benchmark interest rate again.

Following the release of inflation data for July, fed funds futures now offer a higher probability of a 50 basis point rate hike than the Fed in September, a dramatic turnaround from a year ago. barely a day old.

Technically, the index succeeded in its recent rally by confirming the breach of the ceiling of this descending corrective price channel which limited its previous short-term trade. This comes amid continued positive support for its trading above its previous 50-day simple moving average as shown in the attached chart for one (daily) timeframe. The recent rise is attacking the important resistance level of 33,240 which is the resistance we referred to in our previous reports. This is especially the case with the re-emergence of the positive cross with the relative strength indicators, after the index tried to drain its overbought, which was clear in the past.

Therefore, our expectations point to a bigger upside for the index in its next trading sessionespecially in case it breaks above the 33,240 resistance level, to immediately target the 34,118 resistance level. 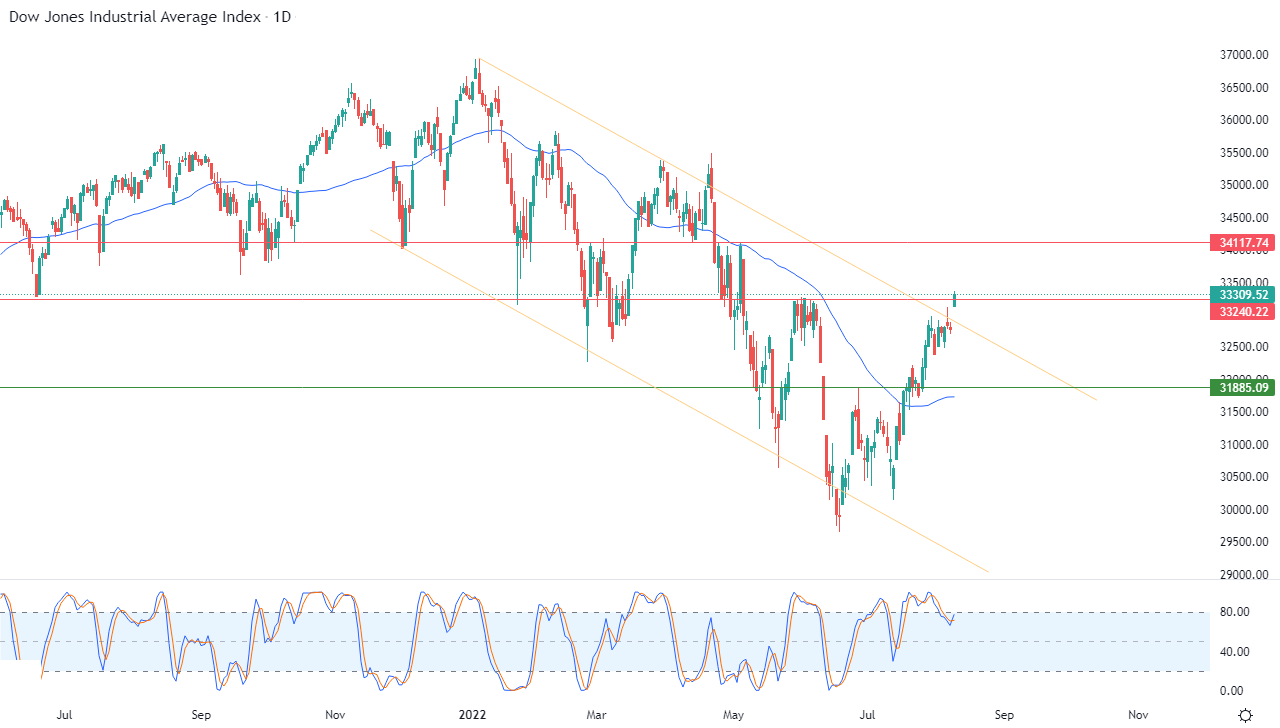 Ready to trade our Dow Jones trading signals? Here are the best CFD brokers to choose from.