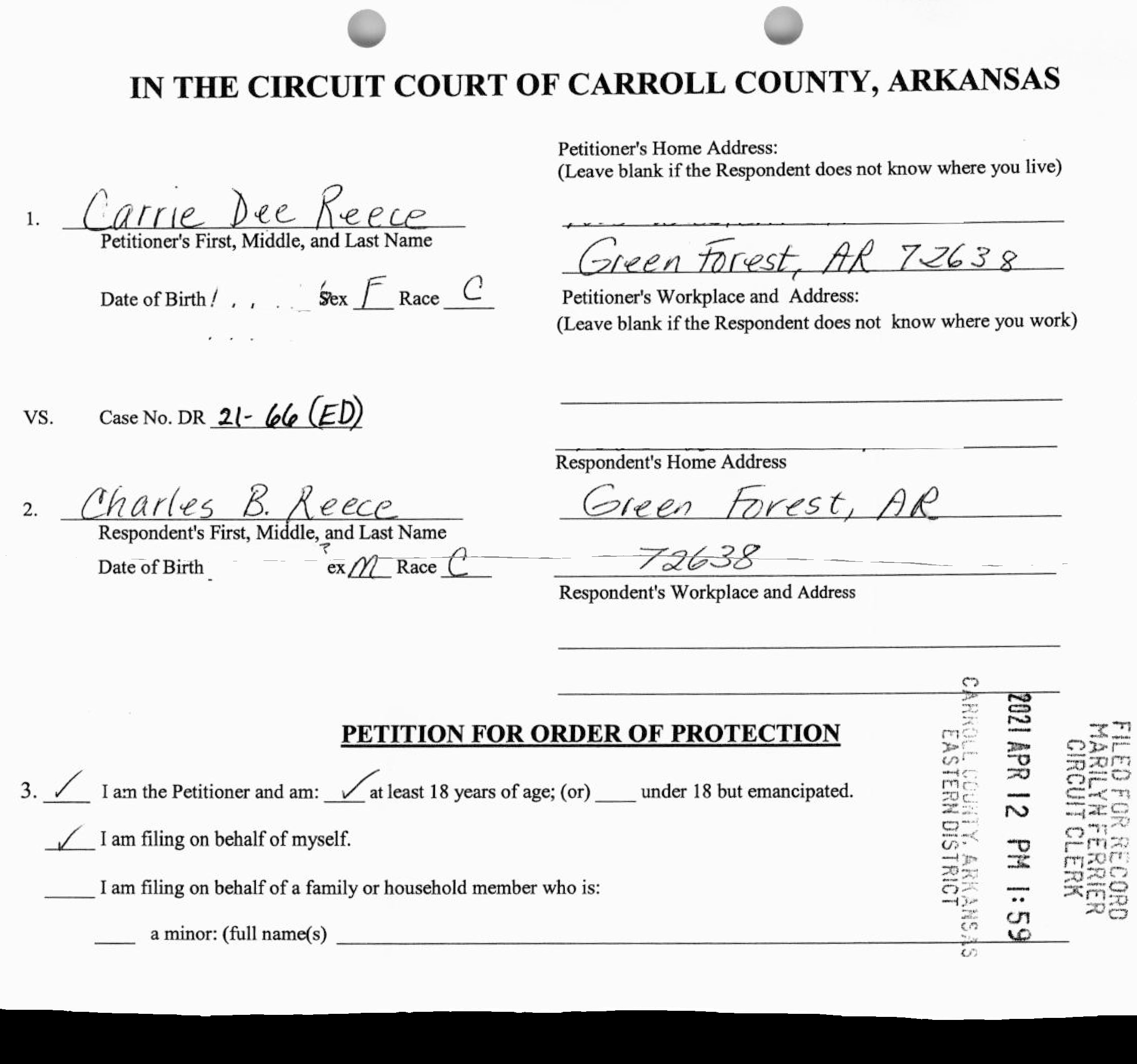 ‘Nothing to that’ Reece responds to police report and tax liens

Reece, 79, also said there ‘was nothing to’ an incident which led his wife to file a petition seeking a protective order against him in April 2021. The petition was later denied on the request of Reece’s wife, Carrie, who had also filed a report with the Green Forest Police Department.

“First of all, the restraining order has been withdrawn,” Reece said on Thursday, Aug. 25. “And so it shouldn’t be public information. I don’t know who the police report was. It was simple. There was nothing to be done. In an affidavit accompanying his motion for an order of protection, filed on April 12, 2021, Carrie Reece wrote that she had recently discovered a letter from the Internal Revenue Service “detailing over $20,000 in unpaid taxes (with penalties and interest)”.

“He hid this information from me and only discovered the IRS letter on my own approx. April 8, 2021,” Carrie Reece wrote. She indicated that the IRS letter was dated March 26 2020.

The Carroll County Circuit Clerk’s Office confirmed Thursday, Aug. 25, that it has documentation of two federal tax liens related to Charlie Reece. One, listing only Charles Reece, shows a balance of $8,404.30. The other, which lists both Charles and Carrie Reece, according to the circuit clerk’s office, lists a balance of $14,826.03.

“As far as tax goes, I got bad tax advice and I’m negotiating with the IRS to get it back,” Charlie Reece said on Thursday, August 25. “But there are snakes in the grass there, so you have to understand that there are going to be things. I’m not even going to offer to do anything that could harm anyone. But I know, I have a good idea who put that out there They already called me anything but a red snake.

Carrie Reece, 66, also writes in the affidavit accompanying her motion seeking a protective order that Charlie Reece took out credit cards in her name without her knowledge or permission and “(r) uined my credit by building up debts”.

“I got a few credit cards,” Charlie Reece said last week. “They were sent to me, and I just sent them back, and that was it. And they approved it.

In her affidavit, Carrie Reece writes that between April 7 and April 11, 2021, she and her husband argued over the IRS letter and “evidence and partial admission of an extramarital affair.”

Charlie Reece then entered the couple’s bedroom and went to his bedside cabinet drawer, where he keeps a handgun, according to Carrie Reece’s affidavit. “I was concerned that he would use it on himself or on me,” writes Carrie Reece.

Carrie Reece writes that she blocked the drawer with her hip and asked Charlie Reece to leave the house but he repeatedly refused. After about two hours, writes Carrie Reece, her husband left to go to the store and she took the handgun and a rifle from a closet at a neighbor’s for safekeeping.

When she got home from work the next day, writes Carrie Reece, she checked the drawer and it had been “searched”. Charlie Reece had arrived home about an hour before his wife and “was in a bad mood”, the affidavit states.

“Later, around midnight or 1 a.m., he came to bed and found me crying,” Carrie Reece wrote in the affidavit. “We talked for a short time, then he got angry and yelled at me. He jumped out of bed and so did I. By the time I walked around the bed, he had opened the drawers and was walking past. He used an aggressive tone and asked me if I had pulled the gun.

Carrie Reece writes that she was crying and scared.

“He came to me and I couldn’t get around him,” she wrote. “Although he didn’t hurt me, he held my arms, stood in front of me and wouldn’t let me go. I cried and said ‘if you please don’t hurt me.'” Charlie Reece wouldn’t let his wife stay in the living room, she wrote, because he didn’t want her to leave the house because of the late hour and because ‘it was raining. . She didn’t want him to be alone in the living room, she wrote, because he has two .22 caliber rifles somewhere in the house “and I was afraid he had them.”

After a while, writes Carrie Reece, her husband came to bed and stayed awake until he sensed she was going to “stay in bed.”

Over that weekend, she wrote, she “pretended to be fine but I was scared.”

Charlie Reece stayed in the house but on Sunday he wanted his wife to go with him to Walmart, which was unusual, she wrote.

“There were no harsh words or arguments [sic]writes Carrie Reece, “but…I felt he was following me.

On Monday morning – April 12, 2021 – the couple drove separate cars to work at schools in Eureka Springs.

“I consulted with my campus resource officer and she advised me to leave and file a police report,” Carrie Reece wrote in her affidavit.

Carroll County newspapers obtained a copy of the police report through a public records request to the Green Forest Police Department.

In an incident report form, under a section titled “Offences”, the form reads “False Imprisonment – 2nd Degree” and indicates that the offense was attempted rather than completed. Green Forest Police Chief John Bailey said it appeared Carrie Reece later declined to pursue criminal charges and none were ever filed. The most likely charge would have been false imprisonment, Bailey said. False second degree imprisonment is a Class A misdemeanor in Arkansas.

In an account included with the incident report, Green Forest Detective Allen Phillips writes that he met Carrie Reece at the police department.

Phillips writes that Carrie Reece told him her marriage “went through a rough patch.”

“Mrs. Reece told me she noticed Charlie had ‘slipped’ and drank more than usual,” Phillips wrote.

Carrie Reece went on to tell Phillips that Charlie Reece got involved in a job “where he would buy items online using his American Express card and then he would create a new shipping label and would ship the items overseas,” the detective’s account reads. .

“Ms. Reece said she wasn’t happy about it and she and Charlie got into a fight,” Phillips wrote. “Ms. Reece said those purchases were about $18,000 to $20,000. Ms Reece said she also found credit cash in her name that she had not made. Mrs Reece told me that over the year Charlie had tried to convince her that she was the person who signed up for the cards but about 2 weeks ago he admitted that he would get the credit card offers in the mail and he would sign his name and get a credit card.

Carrie Reece told Phillips she spent a year and a half working to pay credit card bills and told her husband she would give him an allowance of $700 to $1,000 a month starting in his salary to pay for utilities, food and gas, Phillips writes.

“Ms. Reece told me that when she was trying to resolve the financial situation, she discovered that they owed $20,000 in back taxes that had not been paid,” writes Phillips. “Ms. Reece said she confronted Charlie about back taxes and he got angry and they started arguing. Ms Reece said Charlie told her he had everything under control.

Carrie Reece also told Phillips that she noticed text messages from a family friend on her husband’s phone, Phillips writes.

A message read “hey sweetie are you sleeping?” and the next post was about the woman’s “to-do list,” Phillips writes.

Carrie Reece then described the incident in detail in her affidavit accompanying her application for a protective order, Phillips writes.

“Ms. Reece was unsure if she wanted to pursue criminal charges,” writes Phillips.

When asked to comment on his wife’s tax liens and filings in a phone interview Thursday, August 25, Charlie Reece replied, “I have never intentionally harmed a soul, and that includes my service in Vietnam. That includes everything I’ve done in my life, and for someone to take something that’s been taken down. My wife and I just had a fight and she, for some reason – she had been married before and her ex-husband abused her and she felt that, she was scared. But I will take it very seriously if this, if all this is published in the newspaper.

Charlie Reece, from Green Forest, served as mayor from 2009 to 2018. He unsuccessfully ran against then-incumbent Sam Barr for Carroll County Judge in 2016 and two years later chose not to run re-elect as mayor in order to run again for county judge. He was beaten a second time by Barr.

Mayor Jerry Carlton, who was elected in 2018, is not seeking re-election, but is instead running unopposed for a seat on city council.

Why I don’t worry about a real estate crash