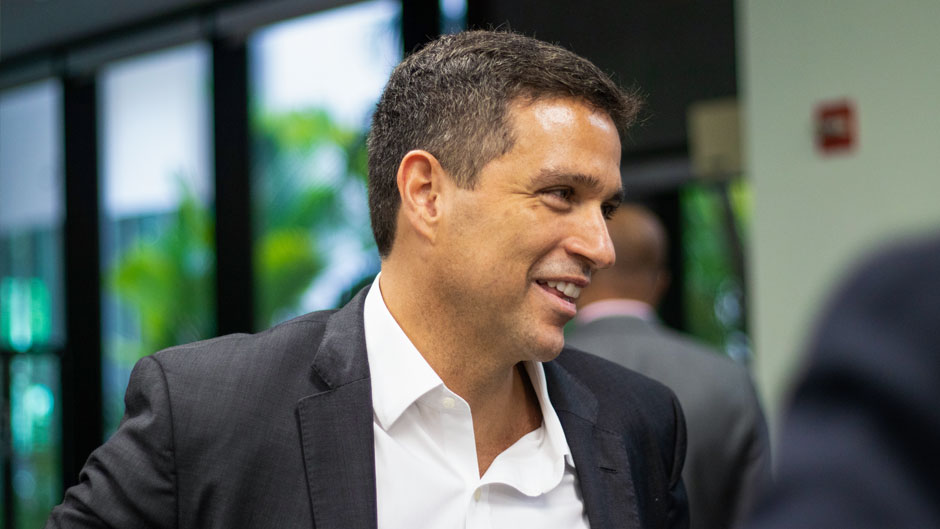 President of the central bank of Brazil: innovations fuel the rebound

Roberto Campos Neto, speaking live at the Miami Herbert Business School, stressed that the new technology-driven policies developed by the central bank are essential to the country’s strong economic recovery.


In his speech to a select audience at the Storer Auditorium on July 8, the President of the Central Bank of Brazil, Roberto Campos Neto, presented a series of innovations in the financial system that have helped the country adapt effectively to two waves of the COVID-19 virus. His presentation was part of the school’s Distinguished Leaders lecture series and marked the first in-person presentation since the pandemic pivot.

“We thought we had 20 million keys (transactions) in the first six months, but we hit that number in three days,” he said, adding that the system is now used by 80% of the population. “The system has probably meant a little less revenue for the banks in terms of payments. But as we develop it, we see that it can do more and more.

Dean John Quelch called the PIX system and the other innovations launched and explored by the bank “fascinating.”

“This concept of reinventing the central bank as a tech company is really a radical breakthrough and very impressive – I’ve never heard of it before,” he said.

He noted that the automated payment system that comes at no cost to consumers has led to a huge increase in the number of cashless transactions, while more traditional forms of transactions have remained largely unchanged.

Alex Horenstein, associate professor of economics, described PIX as a personalized and quite sophisticated Brazilian version of Venmo, with, for example, the added advantage that there is an offline version, as significant regions of Brazil do not have no internet access.

“The fact that there is such an advanced version of a digitized currency developed by an already massively adopted central bank is incredible,” Horenstein said. “This is not yet the case, but it could be the basis of a fully government digital currency or a govcoin, which could be of concern to banks.”

The central bank president, who earned a master’s degree in finance from two different California universities, suggested the innovations were driven in part by the findings of a study group of young players who were asked to describe their ideal financial system. The group identified five key characteristics: inexpensive, transparent, secure, open and fast.

Campos Neto became head of the central bank in November 2019 and soon after, as the pandemic spread, he said he and his team had achieved a frightening thing.

“We found out that there were hundreds of cities that didn’t have ATMs, there was no way people could get money,” he said. “People were taking a bus to another city to make money.”

So they designed a system to solve the problem.

The system is now used by 80% of Brazilians, according to Campos Neto, who added that more innovations – a PIX card that will work as a show-off bus pass – will be released in the coming weeks.

Welcoming the speaker, Paulo Leme, Senior Lecturer in Finance and former Executive in Residence, honored Campos Neto as “a great financial mind, a strong market economist and a very good politician, someone who knows how to avoid trouble. “

In his role as president, Leme said Campos Neto transformed the financial system and moved Brazil to a new frontier – and even stepped in to fill the public health policy void by scheduling the deployment of vaccines for stabilize the country.

“He was able to make things happen and, more than leadership, it shows compassion,” he said.

One of his “biggest surprises” on joining the central bank, Campos Neto said, has been the high-level expertise, contrary to the idea that many of those who work for the bank are too bureaucratized.

“It was a small group of people, all with PhDs, and they wanted to learn, so I sent them overseas to find out about new technologies,” he explained.

That said, if there are any vacancies on the board, Campos Neto said he would not seek to fill them with economists, but rather with data analysts.

Known for his interest in developing sustainable economic policies, Campos Neto was asked if he supports the Dutch carbon tax model.

He suggested that completing the carbon market was a better option than taxation.

“You have this negative externality, people are doing damaging things in the Brazilian forest, and you would be willing to pay for them to do things differently – and they would be willing to do things differently if they could receive payments, but you can’t make that happen, ”he explained. “The way to solve this problem is to have a truly tradable carbon market that is liquid and accessible to all. But so far we have not been able to complete the deal, ”he added.

“People are trying to compensate for this failure by taxing, but it’s horrible,” he continued, “the price efficiently allocates resources in the economy and the tax does the opposite. I get very frustrated when I go to global meetings and people spend a lot of time talking about global taxonomy to solve this problem.

When asked who would become the next central bank chairman, Campos Neto replied that he did not know. “But one thing is for sure, is that they will know more about the technology than I do,” he said, “and whoever follows will have to know even more.”