Rallies at the close after the Fed minutes

I think at best we’re probably looking at a “fade the rallies” situation.

The S&P 500 rallied on Wednesday to hit the 4000 level. However, we have strayed slightly from this large, round and psychologically significant figure as we continue to see a lot of volatility. Whether or not we can hold onto the gains is a completely different question, but at this point I think we have a scenario where the markets will continue to show a lot of volatility. I believe at this point it should be noted that we are also trying to bounce off the bottom of the Bollinger Band indicator.

I believe any rally at this point is likely short-term in nature, so I’m looking for a sign of exhaustion to start selling. The 4100 level would be the next resistance area, followed by the 4200 level. Below that, I believe the 3800 level could offer some support and breaking this level will cause the stock market to crash outright.

Interest rates are starting to drop a bit in 10-year yields, which at least gives bullish traders some hope, but at the end of the day I think this is a scenario where you will continue to to see many problems plaguing the market, and a lot of fear, to say the least. It’s not necessarily a market I’m willing to go long in, but breaking above the 4100 level is at least an attempt to change the overall trend, so it’s possible we have the start of something a bit more big. That being said, many concerns remain about the persistence of inflation and slowing growth. If that’s the case, there’s no real reason to think stocks will go higher in the longer term.

While Wall Street is thriving on cheap money, they’re basically going to wait for the Federal Reserve to step in and save them. We are bouncing back a bit from a 20% decline, which is typical as many traders see this as a great entry point for investments. That being said, the markets can get a lot cheaper given enough time, so you need to be very careful. I think at best we’re probably looking at a “fade the rallies” situation. 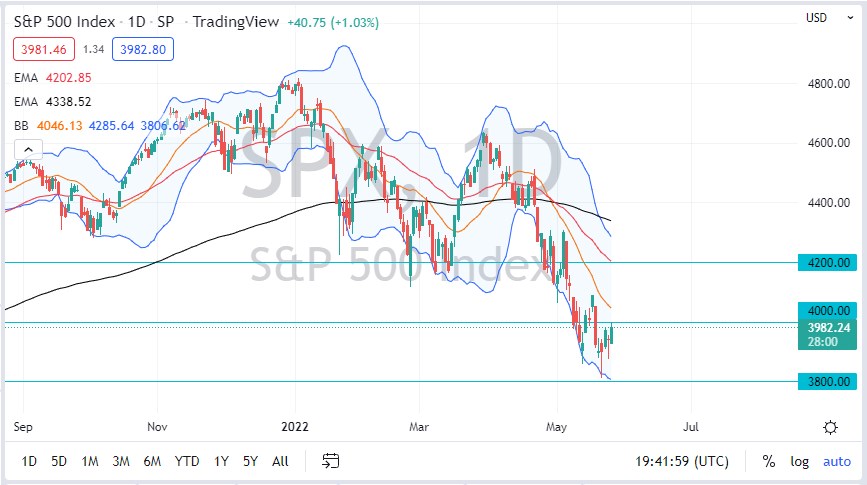 The USD continues to stabilize against the loonie