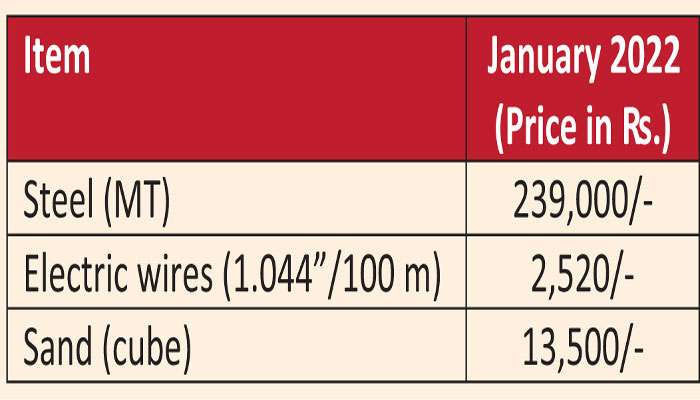 Tokyo Cement Group recorded revenue of Rs. 16,158 million in the 4th quarter of FY21, reflecting a year-on-year growth of 31%, compared to the previous year. Despite the revenue growth, Tokyo Cement’s sales volumes were down 11% from the fourth quarter of last year, due to a plant outage in one of the crushers and unavailability of raw materials. The group recorded a Rs. 2,531 million loss for the fourth quarter, the biggest contribution of which came from foreign exchange losses which amounted to Rs. 4,822 million.

Comparing the Group’s performance year-on-year to the prior year reflects the impact of significant increases in the cost of goods and shortages of raw materials due to the illiquidity of the dollar in the market. Tokyo Cement’s sales volume showed a marginal increase of 1% for the fiscal year, while revenue recorded a 22% year-on-year growth from Rs. 42,962 million to Rs. 52,477 million . The Group recorded a loss of Rs. 453 million for the financial year 2021/22, with the foreign exchange loss amounting to Rs. 5,050 million for the year.

In a statement, Tokyo Cement said that during the quarter, prices for all building materials rose sharply, reflecting the highly volatile macroeconomic environment. Commodity costs have risen alongside world price spikes, compounded by increased freight rates due to higher oil prices and interest for longer credit terms of 180 days.

In addition, constraints related to the establishment of letters of credit (LC) have led to equipment shortages. The price of the 50 kg bag of cement has been adjusted to reflect these cost increases accordingly,

As of this article, the price of cement stands at Rs. 2,850 as per the average exchange rate of Rs. 350 per dollar.

Tokyo Cement said an important factor to note is that the cement industry imports its raw materials with 180-day letters of credit (LC) in accordance with CBSL requirements. Therefore, material received in October 2021, manufactured and sold at an exchange rate of Rs. 203 incurs a significant exchange loss upon settlement in April 2022 at the current rate of Rs. 365 per dollar.

This happened against the backdrop of a greater percentage increase in the prices of all other construction materials, including but not limited to steel, electrical cables and even original sand. local which has no direct impact on the exchange rate.

During this period, the country began to feel the impact of dwindling foreign exchange reserves and the inability of importers to establish LCs in the preceding months, with shortages occurring across all sectors. Due to continued cost increases and currency depreciation, many manufacturers and traders increased commodity prices at frequent intervals throughout the quarter. As a result, price increases for all construction materials slowed ongoing construction projects and effectively postponed the start of new projects until price stability was established in the market. The construction industry has faced downsizing challenges due to shortages of materials, late payments to government contractors and low labor participation rates due to infrastructure breakdown nationwide transportation.

Cement importers have been unable to operate in a highly unstable fiscal environment, which has led to market shortages and increased demand for cement. In this context, the burden of ensuring market stability fell on local manufacturers who also faced similar challenges, in addition to the greater obligation to maintain an extended value chain comprising thousands of stakeholders, many of whom depended solely on Of the industry.

However, commodity shortages caused by the forex crisis have put continued pressure on the production process, resulting in insufficient supply to meet market demand.

The IMF staff-level technical agreement, which is due to be finalized in the coming months, should ease some of the pressures on the economy and open channels for bilateral loans and grants.

However, until then, CBSL is considering further austerity measures to help curb the rapid economic downturn. This includes, but is not limited to, increasing interest rates, restricting imports, continued shortages of essential and consumer goods, the potential for increased direct and indirect taxes, and further measures to strengthen reserves in order to fight against the budget deficit.

These policies will of course have detrimental effects on many industries in the short to medium term, which would lead to a reduction in economic activity and a contraction in all forms of consumption, of which the construction industry is not exempt. .

However, Tokyo Cement has taken many proactive measures to minimize the impact of any economic contractions on the Group’s performance. Anticipating a difficult environment, the Group re-forecasted demand, rescheduled supply and production plans and adjusted cash flows accordingly. The Group has deployed drastic cost reduction measures, streamlined operations and postponed capital expenditures. While the short-to-mid-term economic landscape remains uncertain, Tokyo Cement has a proven track record of resilience and resurgence, and is committed to rebuilding the nation, stronger than ever