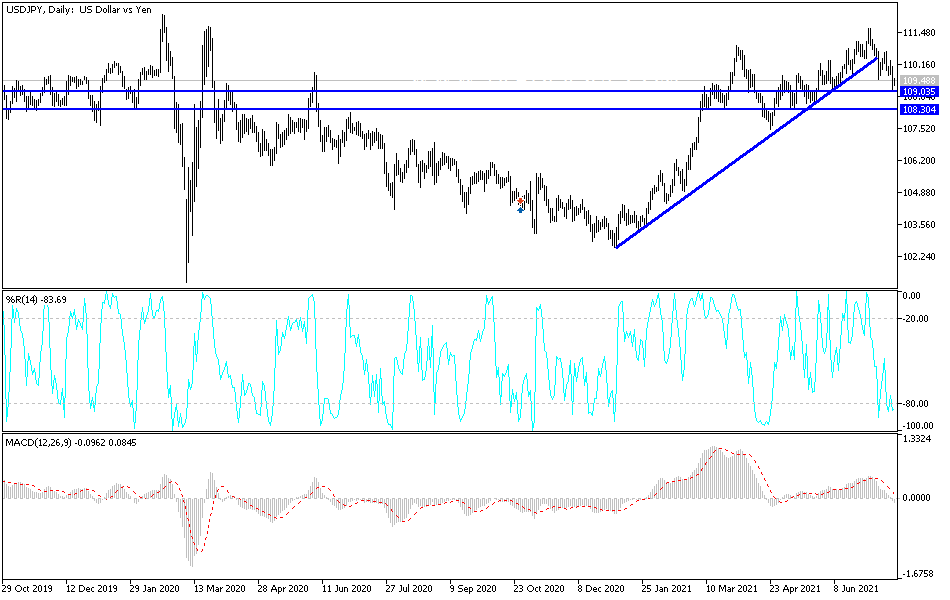 Risk aversion in favor of the yen

Risk aversion persists as an increase in coronavirus infections in many countries has raised concerns about slowing global economic growth.

It was a powerful catalyst for the US dollar to complete its significant gains against the rest of the other major currencies. The Japanese yen is also one of the most important safe havens. Demand for a stronger dollar, which explains the sharp collapse of the US dollar against USD / JPY on the edge of 109.00 support as it settles around the 109.50 level at the start of trading today ‘ hui, tuesday.

Regarding the rapid spread of the Corona Delta variant, US Surgeon General Vivek Murthy has warned that most Corona virus-related deaths are among unvaccinated people. His comments came as infections in the United States rose 70% over the past week and deaths rose 26% amid a resurgence of the virus in parts of the country with low vaccination rates. .

More recently, the UK reported 48,161 new cases on Sunday, with concerns over the continued spread of the delta variable outweighing optimism.

The Japanese government held its economic assessment for the second consecutive month in July, according to the monthly report released by the Cabinet Office. The Japanese economy showed further weakness in some components, although it continued to recover in a dangerous situation due to the emergence of the corona virus.

The Japanese government has maintained its view on private consumption, business investment and exports. Meanwhile, the assessment was lifted on business conditions this month, saying conditions show signs of recovery, although some serious aspects remain. Last month, the government said companies’ judgments on current business conditions appeared to be on hold, while some tough aspects remained. In the short term, the government expects the economy to show some recovery, supported by the effects of policies and improvements in external economies.

Meanwhile, two opinion polls show support for the Japanese government continues to decline and pre-Olympic crowds are beset with new cases of the virus among athletes. A Kyodo poll showed support for the government fell by more than eight percentage points to 35.9%. The Mainichi Shimbun’s support rating dropped four points to 30.

In contrast, the US economic calendar is dominated by housing market reports (housing starts and sales) and the preliminary weekend PMI. Additionally, U.S. Federal Reserve officials are entering a period of calm ahead of the FOMC meeting on July 27-28.

According to the technical analysis of the pair: USD / JPY moves to the expected support levels if the pair abandons the psychological resistance level of 110.00, the most important for the bulls to control performance. The current major target for more bear control is 108.80, and from there and at least it’s better to buy the currency pair, waiting for the time to rebound to the upside. On the upside, resistance at 110.00 will remain the most important for now, to stimulate movement against the current bearish outlook.