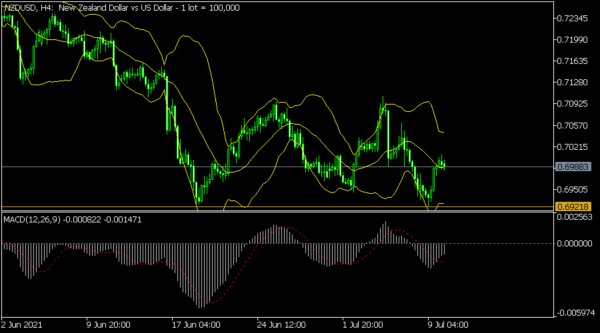 The Japanese yen was little changed against the US dollar after relatively positive Japanese economic data. According to the finance ministry, the country’s producer price index reached 5.0% in June, better than the median estimate of 4.7%. It increased 0.6% over one month. Other data showed that basic machinery orders grew 7.8% month-on-month and 12.2% year-on-year. These figures prove that the Japanese economy is doing relatively well as local and international demand increases.

US futures fell today as traders began to look to the next season of gains. Dow Jones, S&P 500 and Nasdaq 1000 futures fell less than 0.10%. The earnings season will begin this week as big banks like JP Morgan, Wells Fargo and Bank of America report their results. Other large companies that will publish their results are Delta, Blackrock and UnitedHealth Group. Analysts will focus on growth at a time when valuations are stretched. The S&P 500 even recorded 38 record-breaking closings this year. According to FactSet, analysts expect S&P 500 company revenues to grow 64% in the second quarter from a year earlier.

The New Zealand dollar edged down after the country’s latest electronic sales. Retail sales fell from 1.7% in May to 0.9% in June, according to the statistics agency. This decrease translated into an increase of 4.0% year-on-year. This drop is part of normalization as the country is experiencing a relatively stronger recovery. Other data showed that business confidence rose sharply, leading more analysts to forecast a hawkish Reserve Bank of New Zealand. Many companies have said they expect business conditions to improve as the local and international market reopens.

NZDUSD fell to 0.6988 after the latest New Zealand electronic sales data. On the four hour chart, the pair has moved towards the midline of the Bollinger bands. It is also slightly above the neckline of the double top pattern at 0.6945. It also formed a double bottom pattern at 0.6921. Therefore, the pair will likely stay in that range today with the main support and resistance levels at 0.6950 and 0.7050.

EURUSD hit 1.1870 during the Asian session. On the four hour chart, the pair moved above the upper side of the descending channel. It also broke the 25-day exponential moving average as the DeMarker moved up to the overbought level. MACD signal and histogram have crossed neutral. The pair will likely resume the downtrend as the bears try to move back to the descending channel.

USDJPY was little changed after the latest Japanese machinery and PPI data. It rose to 110.10, higher than last week’s low of 109.50. On the four-hour chart, the pair is slightly below the 25-day moving average while the oscillator’s moving average has moved above the neutral level. The MACD also made a bullish divergence pattern. Nonetheless, the pair could resume the downtrend as bears try to test last week’s low at 109.50.