Technical analysis of gold: the price resists the recovery of the dollar

For the second day in a row, the price of gold is trying to resist the strength of the US dollar. The price of gold settled around the $1852 per ounce level at the time of writing the analysis. It has recovered from the recent selling trades which pushed it towards the support level of $1829 per ounce. Despite the strong dollar and rising Treasury yields, gold prices pared losses and stabilized higher as weakness in equity markets sparked buying in the safe-haven commodity.

Recently, gold prices have fallen as the dollar rose and Treasury yields rose amid concerns about rising inflation and the prospect of strong monetary tightening by the Federal Reserve. American. However, the price of bullion recovered most of what it had lost, as the sell-off in the stock markets led to safe-haven buying.

Data from the US Department of Labor showed job opportunities in the country fell by 455,000 to 11.4 million in April. The department’s figures are down from around 11.9 million in March, the highest level for more than 20 years. At this level, there are about two vacancies for every unemployed person. This is a sharp reversal of a historical trend: before the pandemic, there were more unemployed people than there were jobs available. The number of people leaving jobs remained near record highs at 4.4 million in April, most unchanged from the previous month. And almost everyone who quits their job does so to take another job, usually for higher pay.

Federal Reserve Chairman Jerome Powell has targeted the high level of jobs available in the United States and hopes that by raising US interest rates the Fed can slow demand for workers and reduce the number of jobs vacant. Powell and other Fed officials have said their goal is to reduce demand and therefore slow wage increases to calm inflation, perhaps without forcing many layoffs.

On the other hand, a separate report from the Institute of Supply Management showed that manufacturing activity in the United States of America unexpectedly grew at a slightly faster pace in May. The ISM said its manufacturing PMI rose to 56.1 in May from 55.4 in April, and any index reading above the 50 level indicates growth in the sector. The rise surprised economists, who expected the index to fall to 54.5.

According to Gold Technical Analysis: Gold’s recent performance was normal, after attempts to rebound and stop gains. The price of gold has not found enough momentum to continue higher, and I still prefer to buy gold at all falling levels. The $1829 and $1815 support levels are the most suitable for this. In general, the gold market still has factors that could push it higher in the future, namely the continuation of the Russian-Ukrainian war and its negative consequences on the future of the global economic recovery.

Gold price resistance levels are currently at 1865 and $1880 is important for the bulls to regain control of the trend. I expect movements in tight ranges for the gold market until the US jobs numbers are announced. 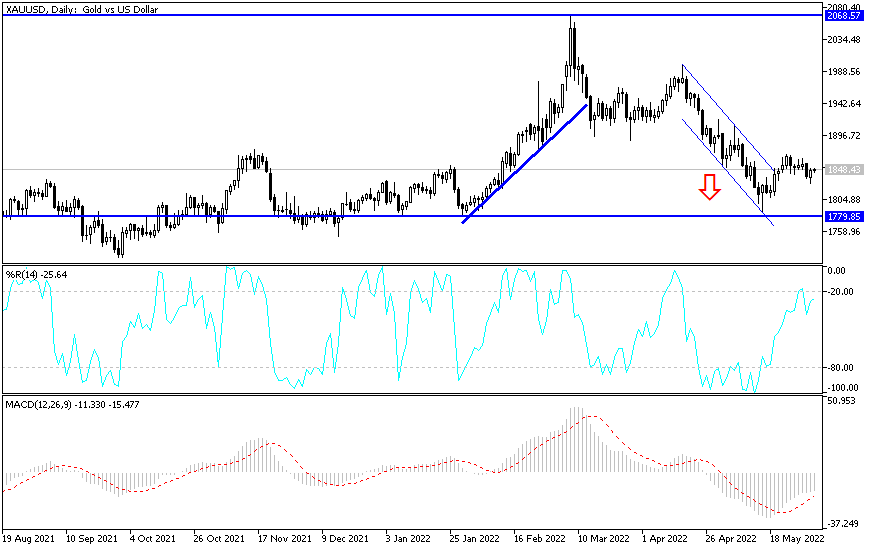