Demand for gas from electric utilities declined, with some 560,000 Florida homes and businesses without power after Hurricane Ian hit the state Sept. 28-29.

U.S. futures are still up around 75% so far this year as higher global gas prices have fueled demand for U.S. exports amid supply disruptions and sanctions related to the Russian invasion of Ukraine on February 24.

US gas futures are lagging behind world prices because the US is the world’s largest producer with all the fuel it needs for domestic use. Capacity constraints and free port outages prevent the country from exporting more natural gas.

Meanwhile, data from pipeline operator Cascade showed gas flows to Eastern Europe fell to zero again on Tuesday. This happened on the Yamal-Europe pipeline to Poland from Germany after a brief recovery in the early hours of the morning.

Sweden on Monday sent a dive vessel to the site of the Nord Stream pipelines that exploded last week after explosions in the area. Their goal is to investigate an accident that has heightened the tension in Europe’s energy crisis.

Technically, the price is affected by a negative technical structure formed earlier in the short term, which is the head and shoulders pattern as shown in the attached chart for one (daily) period. The negative pressure for its trading below the previous 50-day simple moving average has continued, as we notice amidst this the re-emergence of negative RSI cross indicators, despite being stable in oversold areas.

Therefore, our expectations point to a bigger decline in Natural Gas in its next trade, especially in case it breaks the current support level of 6.400 and then targets the support level of 5.554. 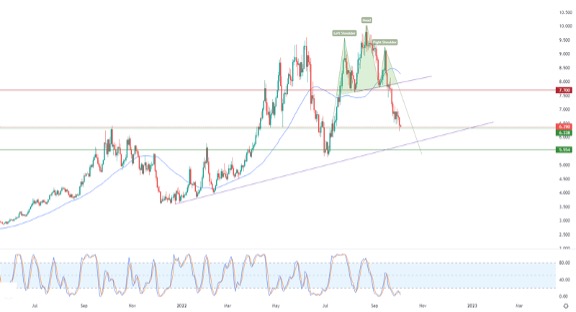 Ready to trade our natural gas trading forecast? We have compiled a list of the best commodity broker platforms worth trading with.

Technicals point to renewed downside pressure for the Loonie