Reacting to the event, US stocks fell on Tuesday, with the S&P 500 index losing more than 1% on the eve of the FOMC decision. Wild daily market moves have been so common lately that options traders are loading short-term bets at a rate not seen in the post-close era.

Moving developments in the market

Over the past month, the average daily volume of derivatives contracts linked to the largest ETF that tracks the S&P 500 (SPY index) with a one-week expiry has reached the highest level since at least the start of 2020, according to the data engaged by Susquehanna International Group.

However, trading in long-term contracts has mostly slowed or stagnated. Whether these are directional or hedging bets is hard to say. But the focus on the here and now may reflect a lack of conviction in trading longer-term options at a time when the market is stuck in a range. Add to that all the market-moving developments, like last week’s shocking inflation data, which is a recipe for traders to shorten their time horizon.

For equity investors, the near-dated options pool means the cash market is most likely hostage to the derivatives market. While the narrative is controversial, Friday’s $3.2 trillion options expiration, for example, was seen in some circles as a catalyst that exacerbated the stock selloff triggered by the CPI reading. warmer than expected.

Expectations are high for the Federal Reserve to raise US interest rates another 75 basis points on Wednesday. With continued uncertainty over the Federal Reserve’s monetary policy and its impact on the US economy, analysts tracked by Bloomberg showed mixed views on the stock market on a scale rarely seen on Date. While the long-term outlook remains murky, equities have become big business as obsession with economic data or Fed rhetoric overshadows market fundamentals.

The direction of the XAU/USD gold price is still trending lower as long as it is stable below the $1700/oz support level. The bears’ control over the trend could increase if prices approach the support levels at $1660 and $1638, respectively. The last level is important to expect the psychological support level of $1600, especially if the strength of the US Dollar increases.

On the other hand, the return of gold price stability, above the $1700/oz level, may encourage bulls to start trading, but with caution, as the US Dollar is still strong. . The price of gold will be affected today by the level of the US dollar and whether or not investors are willing to risk, and prices could remain in tight ranges until central bank announcements react. worldwide this week, especially in the United States. Federal Reserve.

Ready to trade today’s technical analysis of gold? Here are the best gold brokers to choose from. 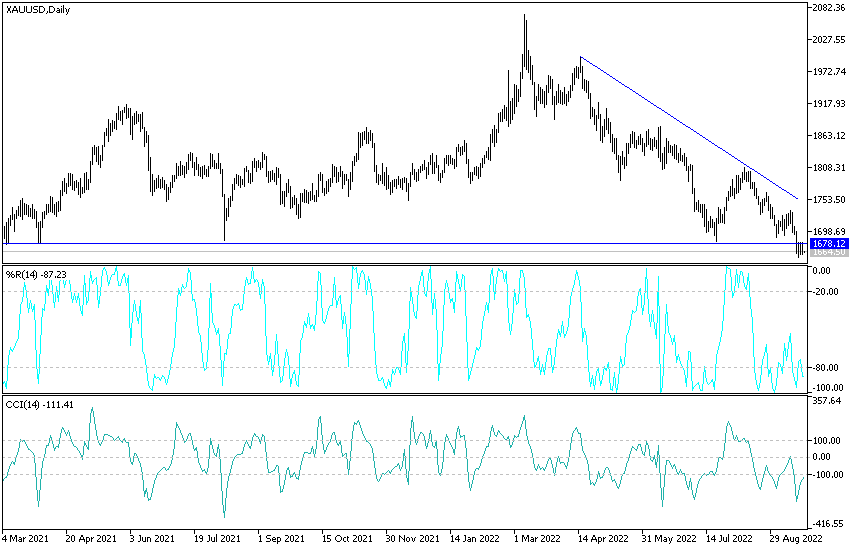