The past few weeks have certainly not been good for gold.

After nearly embracing the psychological $2000 level in mid-April, the bulls ran out of steam – allowing the bears to drag the precious metal to prices not seen since February 2022!

Last Friday’s strong US report added to gold’s woes as expectations intensified on the Federal Reserve’s continued aggressive approach to monetary policy. The report comes after the Fed raised interest rates by 0.50 basis points for the first time since 2000. 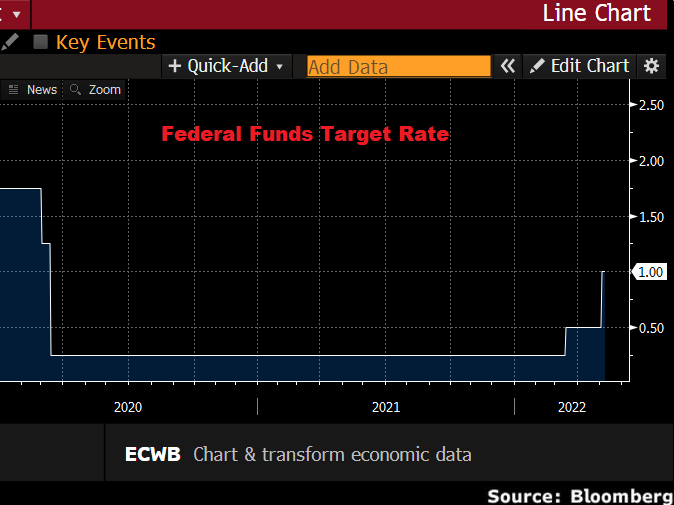 As the dollar hits its highest level in two decades and Treasury yields rise amid expectations that the Fed may continue to raise rates to tame inflation, gold could be in trouble. 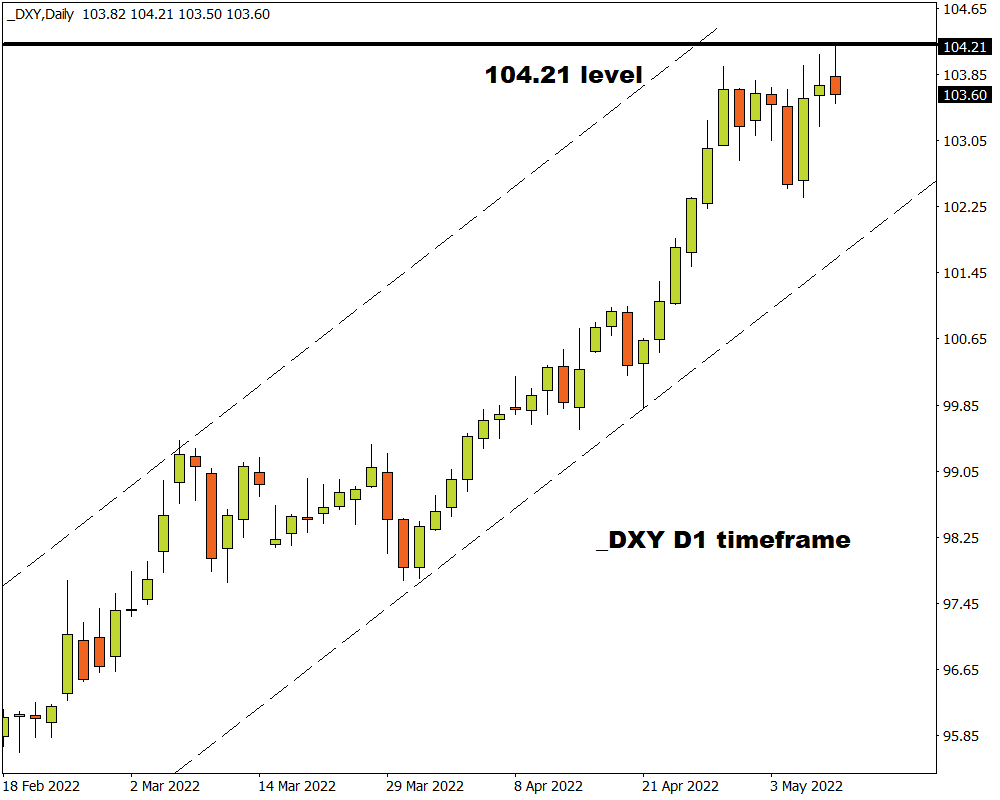 The week ahead promises to be eventful for the precious metal thanks to key US economic data, speeches from Fed officials and ongoing geopolitical risks.

Technically, the path of least resistance is pointing south with price hovering above the $1855 support at the time of writing. Although the balance of power currently tilts in favor of the bears, the bulls could still strike under the right conditions. 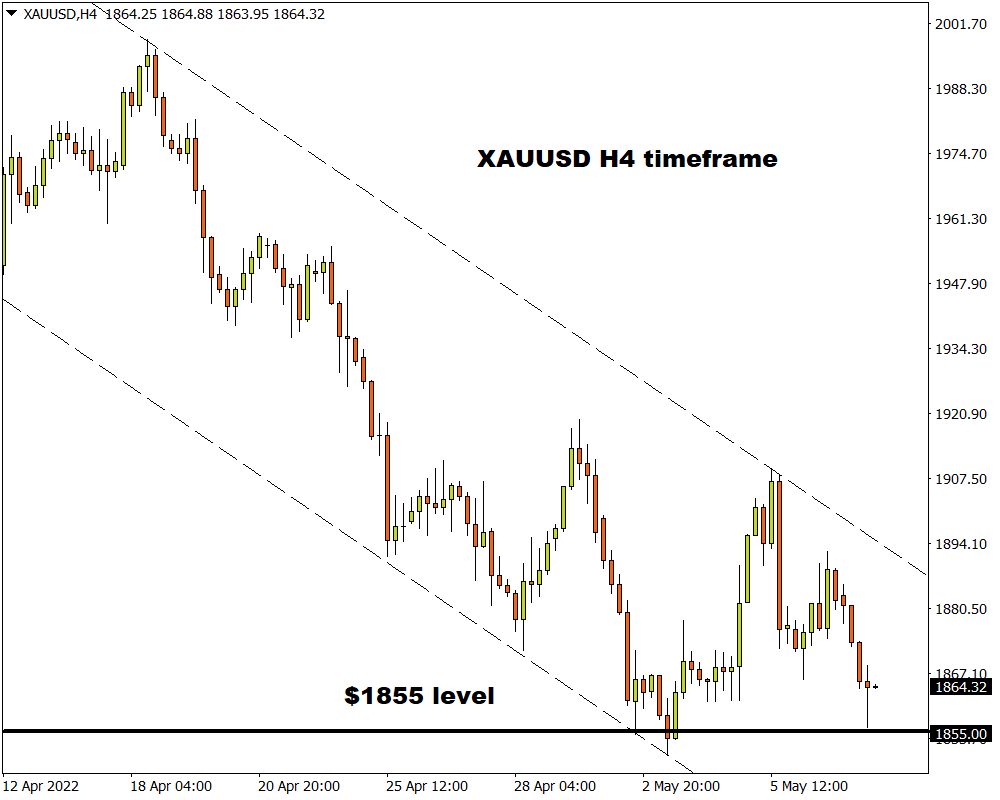 Before we cover what to expect from gold over the next few days, it’s worth bearing in mind that the precious metal has fallen around 6% since April 18, when prices almost hit 2 $000.

Since early May, gold has lost nearly 2% and extended its longest streak of weekly losses this year. 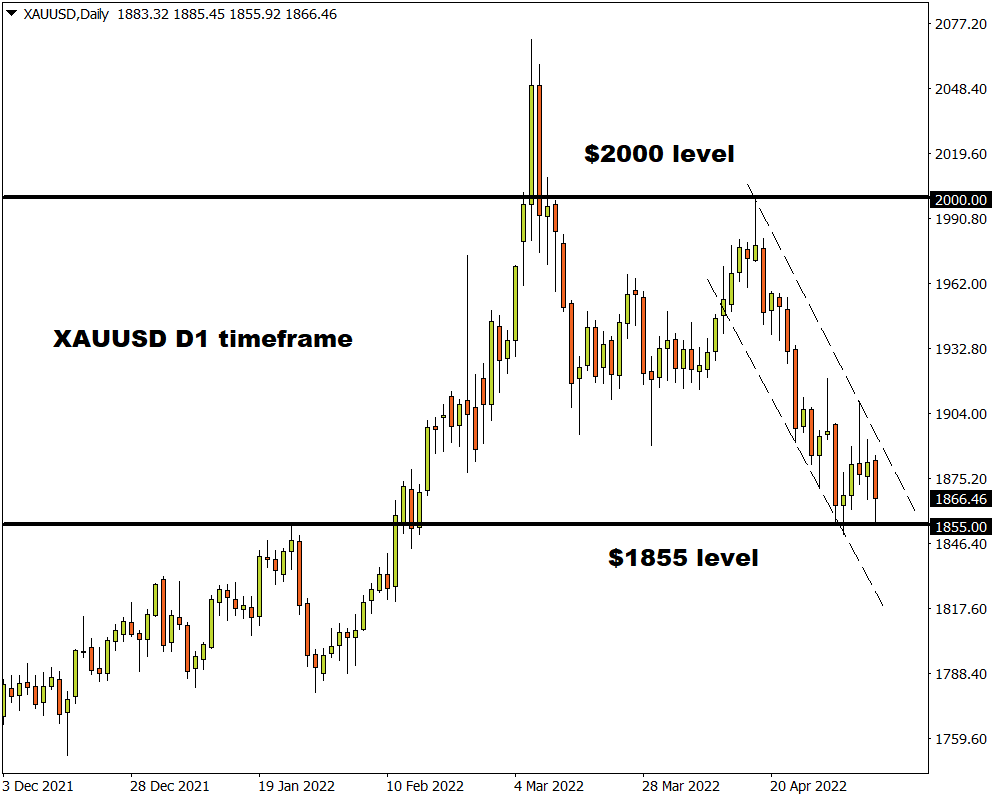 As the 10-year Treasury yield hits its highest level since November 2018, gold may struggle to shine. It should be kept in mind that the precious metal offers no yield, which makes it less attractive to investors in an environment of rising Treasury yields. 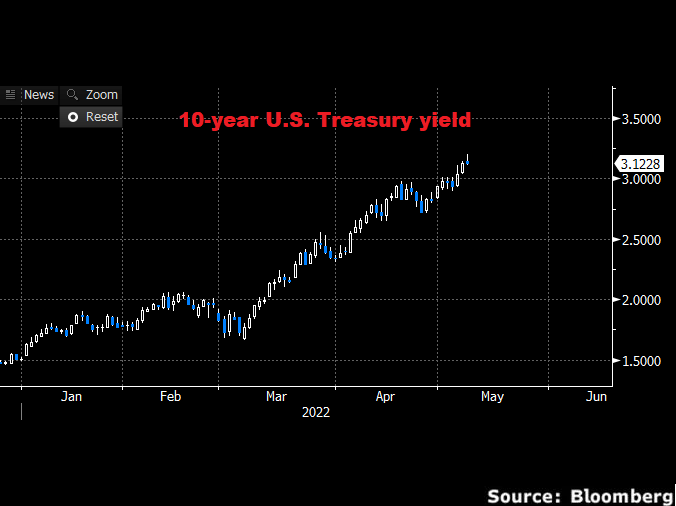 U.S. Inflation Data and Fed Speeches at a Glance

The major risk event for gold could be the pending US CPI report.

Given that markets remain highly sensitive to inflation fears, the report could trigger explosive levels of volatility in gold. The key question is whether the report will drag the precious metal down or provide a lifeline. According to a survey of economists by Bloomberg, US inflation is expected to rise to 8.1% year-on-year in April from 8.5% in March. A figure that beats market expectations could send the dollar higher, putting downward pressure on gold prices. Expect gold to also feel the burn if speeches from Fed officials over the next few days reignite expectations around a 75 basis point rate hike in June.

Geopolitical risks could provide a cushion

As the Russian-Ukrainian conflict continues, global sentiment is expected to remain fragile as investors take a cautious approach to riskier assets. Inflation concerns and growing worries about China could fuel risk aversion sentiment, providing some support for gold. Will this support be enough to counter the pressure created by the appreciation of the dollar, the rise in Treasury yields and bets on the Fed’s rate hike? Time will tell us.

According to an automated report from Bloomberg, gold ETFs cut 66,718 troy ounces of golf from their holdings last Friday, bringing net purchases this year to 8.42 million ounces.

The outflow could be the product of the strong US jobs report, which boosted bets on the Fed’s rate hike and dollar appreciation. A gold ETF gives investors exposure to gold without physically owning it. In this case, ETF outflows are considered bearish for the underlying asset.

Gold breakdown on the horizon?

The subtitle says it all.

Gold remains under pressure on the daily charts with price hovering above the $1855 support at the time of writing. Over the past few weeks, the precious metal has been beaten by a stronger dollar, rising Treasury yields and bets on the Fed’s rate hike. Prices are bearish with a breakdown below $1855 leading the way towards $1820 and $1780. If $1855 proves to be reliable support, prices could rebound towards $1900 and $1920.

Zooming out on the monthly charts, prices remain in a wide range with support around $1700 and resistance at $2000. A major directional catalyst may be needed for gold to secure a monthly close above or below these key levels. 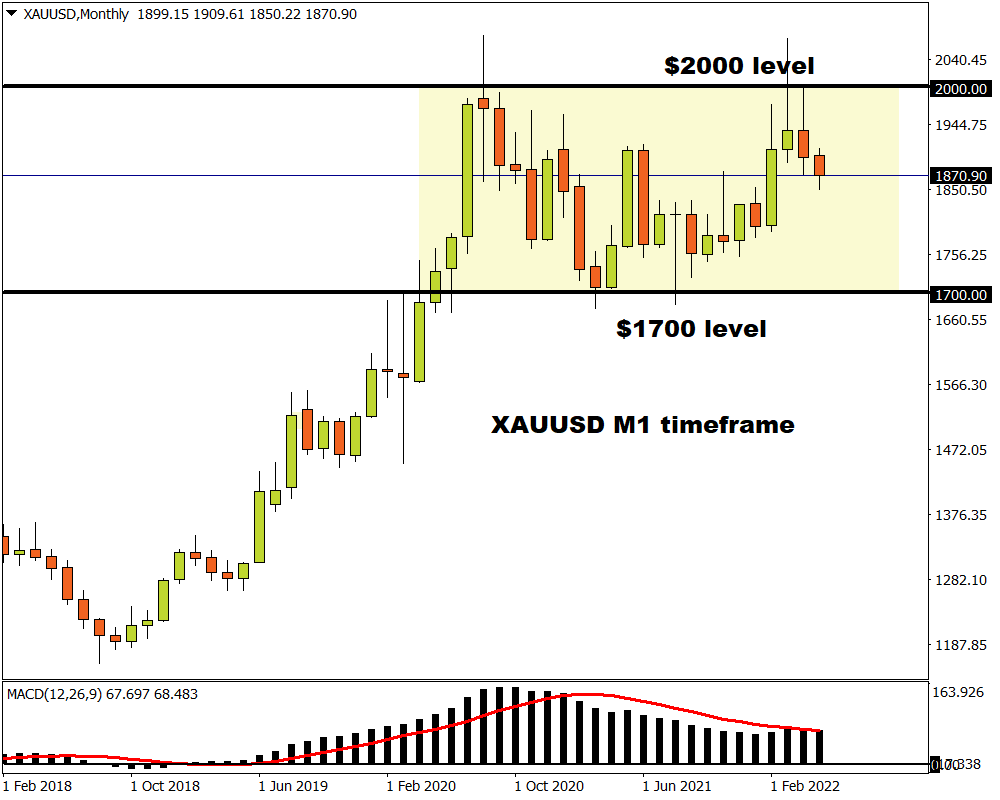