Get our trading strategies with our monthly and weekly forecasts of currency pairs to watch using support and resistance for the week of January 10, 2022.

This week I’ll start with my monthly and weekly forecasts for currency pairs to watch. The first part of my prediction is based on our research of Forex prices for the past 20 years, which shows that the following methodologies have all produced profitable results:

Let’s take a look at the relevant data on currency price movements and interest rates to date, which we’ve compiled using a trade-weighted index of major global currencies:

For the month of January, I made no predictions.

In my previous forecast last week, I didn’t make any weekly forecasts, as there hadn’t been any unusually strong countertrend moves. Mitigating strong weekly counter-trend price movements is the basis of my weekly trading strategy.

I am not making any weekly forecasts again as there has not been any significant countertrend price movement in the Forex market in the past week.

The Forex market has seen a decline in its directional level volatility Last week, due to the complete lack of high impact data releases, with just 22% of all major currency pairs or crosses moving more than 1% in value. Directional volatility is likely to increase this week as we approach the new year and get the US CPI data (inflation).

The past week has been dominated by the relative strength of the pound sterling and the relative weakness of the Australian dollar.

You can trade our forecasts in a real or demo Forex brokerage account.

Let’s see how the trading reversals of two of last week’s key levels could have worked:

We expected the 115.02 level to be able to act as support, as it previously acted as both support and resistance. Note how well these “reversing” levels can work. The H1 chart below shows how the price immediately started Monday’s New York session with a large bullish hourly candlestick, generally a good time to enter new trades in major currency pairs, marked by the up arrow in the price chart below as it rose from the support level. This trade has been very profitable, achieving a maximum positive reward / risk ratio so far of over 4 to 1 depending on the size of the entry candlestick. 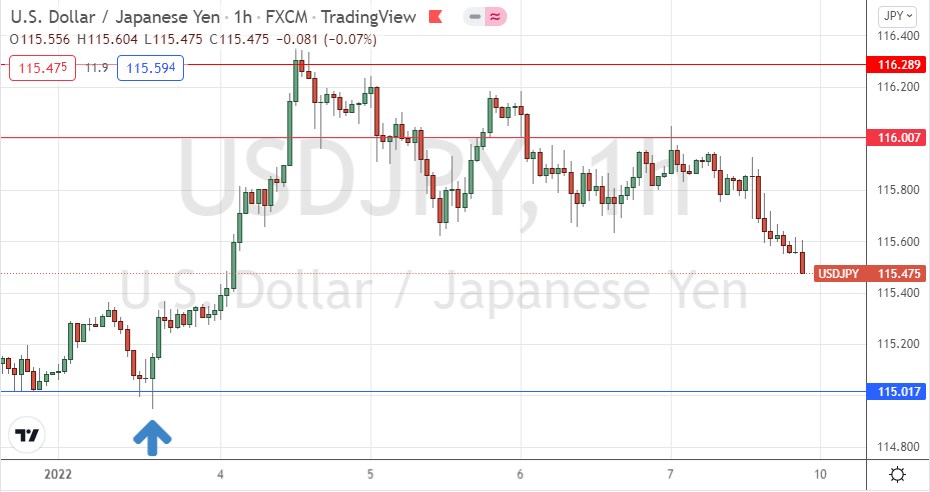 We expected the level at 1.2812 to be able to function as resistance, as it previously acted as both support and resistance. Note how well these “reversing” levels can work. The H1 chart below shows how the price rejected this level with a fairly large doji candlestick just after the start of last Thursday’s London session, often a good time to enter a new trade in a major currency pair in the Forex involving the US dollar, marked with the down arrow in the price chart below. This trade has been very profitable so far reaching a maximum positive reward / risk ratio of over 6 to 1 depending on the size of the entry candlestick.

It’s all for this week. You can trade our forecasts into a real or demo Forex brokerage account to test the strategies and build your confidence before investing real funds.