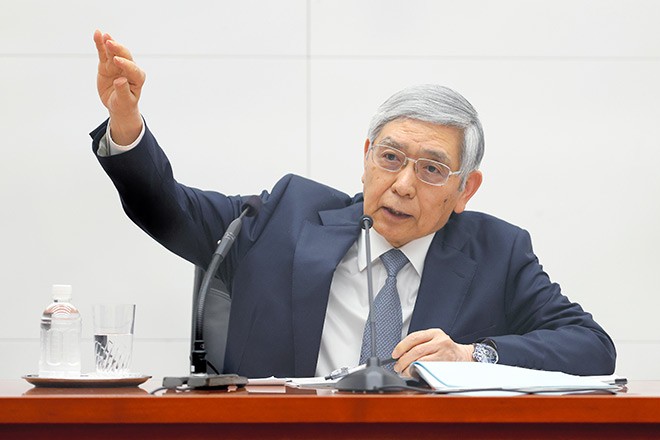 The Bank of Japan decided on March 18 to maintain its monetary easing measures rather than raising interest rates as central banks in the United States and Europe are doing.

The decision came amid growing concerns in Japan over rising prices for fuel and other goods due to Russia’s invasion of Ukraine. The US Federal Reserve and the Bank of England have raised interest rates in recent days on inflation fears triggered by rising prices. The European Central Bank was also moving towards monetary tightening measures.

But BOJ Governor Haruhiko Kuroda told a press conference on March 18 that the rise in prices in Japan was of a different nature from the inflation experienced in the West.

He explained that the current price hikes were a “temporary phenomenon” caused by rising costs of imported fuel, which in turn drove up transport costs to deliver food and other goods.

Kuroda insisted that the situation in Japan is very different from that in the United States where not only has the pace of economic recovery exceeded that of Japan, but where price increases have also been accompanied by wage increases.

He said Japan’s economy was still reeling from the effects of the novel coronavirus pandemic and needed additional support through monetary easing.

But fears are growing about the possibility of stagflation in Japan, a combination of rising prices and a collapsing economy.

“The feeling among ordinary people going about their daily lives is a general concern about the strong possibility of falling into stagflation because the economy is collapsing and wages are not rising, while prices at the consumption continue to rise,” said Hideo Kumano, chief economist at the Dai-ichi Institute of Life Research.

While the BOJ has maintained a strict monetary easing policy for about nine years, wages have barely increased.

If consumer prices continue to rise, consumption will inevitably decline, dealing another blow to the economy. With higher interest rates in the West, there is a strong possibility of further weakening of the yen as it is sold to buy dollars. This, in turn, would drive up the price of imports, further worsening the price situation.

SARB to make public its stake in an African bank