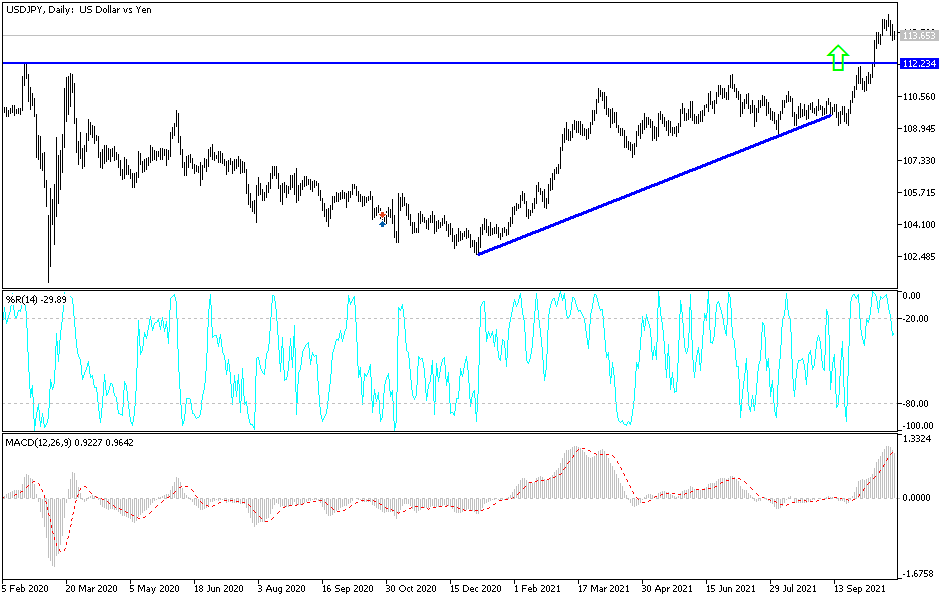 For the fourth day in a row, the USD / JPY is taking profit after its recent gains. The buy and sell operations pushed the currency pair towards the support of 113.41, where it has leveled off near at the time of this writing. Gains from the bullish rebound pushed USD / JPY towards the resistance level of 114.70, its highest since trading in 2018.

The strong gains of the US dollar in the Forex market were motivated by expectations that the US Federal Reserve would abandon its stimulus plans for the US economy in order to cope with the effects of the coronavirus, and the results of the data on the inflation and the US labor market have supported these. expectations. On the other hand, Japan faces a low vaccination rate against the pandemic, as well as signs of an economic slowdown due to the energy crisis and disruption of global supply chains.

On the other hand, the White House is considering a tax on the investment income of billionaires – less than 1,000 of the richest Americans with at least $ 1 billion in assets. He also introduced a minimum 15% corporate tax rate designed to ensure that all companies pay what Biden calls their “fair share” – despite the fact that the richest 1% already pay 40% of the revenue. country tax. Democrats originally predicted Biden’s package would include $ 3.5 trillion in spending and tax initiatives over 10 years. But demands from the moderates led by Manchin and Sinema to contain the costs mean its final price could be less than $ 2 trillion.

A weak Japanese yen is generally a boon to the Japanese export-oriented economy. But when combined with rising crude oil and commodity prices, it leaves the economy facing a double whammy that is expected to hamper economic recovery from the pandemic. The recent fall of the yen to its nearly four-year low against the US dollar, coupled with rising US oil prices to a seven-year high, threatens to reduce household spending even as the impact of COVID-19 continues to be felt. The combination is also expected to differentiate between companies that have benefited from a pick-up in the fallout from the pandemic and those that have not, economists say.

The weak yen has pushed up the prices of imported goods such as oil, putting Japan at risk at a time when the resource-scarce country saw import prices rise at the fastest rate in four decades last month. Wholesale prices have also risen sharply, testing the affordability of Japanese companies that have chosen to absorb higher costs rather than pass them on to consumers. Some food and gasoline prices are already starting to rise to put pressure on consumer spending.

In the short term, depending on the performance on the hourly chart, it appears that the USD / JPY is trading as part of the formation of a descending channel. This indicates significant short-term bearish momentum in market sentiment. Therefore bears will look to extend current declines to 113.25 or lower to support at 112.98. On the flip side, bulls will target potential rebounds around 113.71 or higher at 113.98.

Over the long term, and based on the performance of the daily chart, it appears that the USD / JPY is trading as part of the formation of a sharp bullish channel. This indicates strong long-term bullish momentum in market sentiment. Therefore, the bulls will look to ride the current ascending wave towards 114.51 resistance or above 115.80 resistance. On the other hand, bears will target long term withdrawals around 112.26 support or lower at 110.93 support.