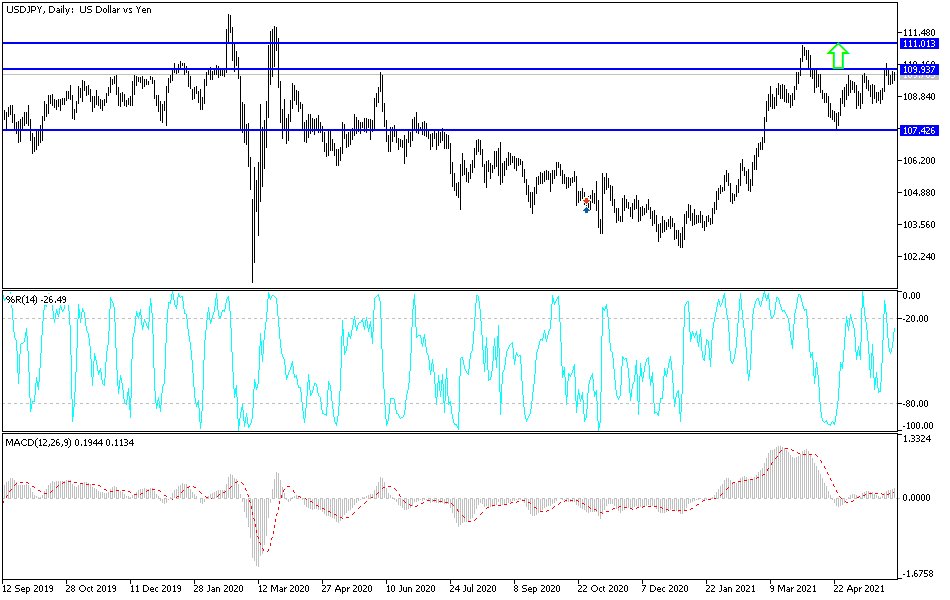 While waiting for US economic data

For the second day in a row, the USD / JPY currency pair is attempting to break through the psychological resistance level of 110.00 to get out of the downward quagmire.

This strongly and directly affects the performance of the dollar against the rest of the other major currencies. Ahead of its announcement, partly reflecting the positive effects of rising Covid-19 vaccination rates and lax social distancing measures, the Fed’s Big Book said the U.S. economy had grown at a somewhat slower pace. faster from the beginning of April to the end of May.

The Beige Book, a compilation of evidence on economic conditions in each of the twelve federal districts, still describes the pace of economic growth as moderate. For its part, the Fed said the effects of rising immunization rates were more pronounced on consumer spending, as the increase in leisure travel and restaurant spending added to continued strength in consumer spending. other categories of expenditure.

However, several regions also highlighted the negative effects of supply chain disruptions, with manufacturers reporting that widespread material and labor shortages combined with delivery delays made it difficult to get products to customers. Similar challenges have also plagued the housing sector, where strong demand, supported by low mortgage interest rates, has outstripped the ability of home builders to build, prompting some to limit sales.

The US central bank has acknowledged that ongoing disruptions in the supply chain have also helped to increase overall price pressures since the publication of the last Beige Book in April. The Fed also said, “Input costs have continued to rise across the board, with many contacts citing sharp increases in construction prices and raw material manufacturing.”

With increasing demand allowing some businesses to pass higher costs on to their customers, contacts expect to face further cost increases and higher prices in the months to come.

Ahead of Friday’s monthly U.S. employment report, the Big Book said employment levels had risen at a relatively constant rate, with two-thirds of counties reporting modest job growth over the course of the reference period. While job growth was strongest in food services, hospitality and retail, the Fed noted that it was still difficult for many companies to hire new workers, especially low-hour workers, truck drivers and skilled tradespeople.

The Fed also said: “A shortage of job applicants has kept some companies from increasing production and, less frequently, has led some companies to cut hours.”

The publication of the Beige Book comes two weeks before the Fed’s next monetary policy meeting, scheduled for June 15 and 16.

According to the technical analysis of the pair: As I mentioned before, the performance of the USD / JPY currency pair will not strengthen without a breakout and stability above the psychological resistance of 110.00 as this will cause forex investors to buy to push the currency pair to stronger bullish levels and closer to it after 110.35, 111.20 and 112.00. It all depends on investor confidence in the event that today’s and tomorrow’s economic data results are better than expected. Conversely, negative results can push the currency pair to move into its descending channel, again reaching the 109.25, 108.80 and 108.00 support levels.

The dollar will be affected today by the announcement of the ADP reading of the evolution of the number of nonfarm jobs, weekly jobless claims in the United States, nonfarm productivity and the ISM of services PMI .